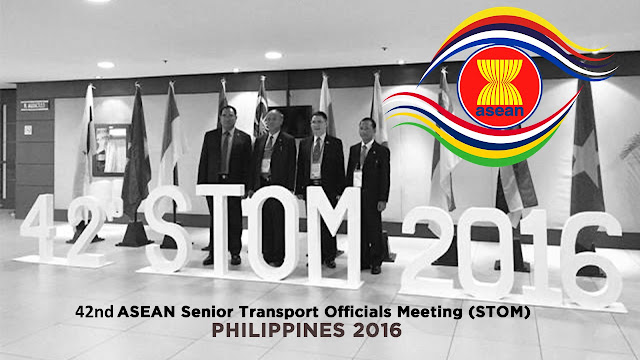 Transport officials and delegates from the 10 Member States of the Association of Southeast Asian Nations (ASEAN) gathered today for the opening of the 42nd ASEAN Senior Transport Officials Meeting (42nd STOM).

The STOM, which works under the direction of the ASEAN Transport Ministers, held plenary sessions to discuss various projects and policies designed to enhance regional cooperation, particularly in the aspect of transportation. The meetings will run until November 16. Within this period, STOM officials will also hold separate sessions with this year’s dialogue partners: China, Japan, and Korea.

Among the topics to be discussed is the implementation of short and medium term work plans under the Kuala Lumpur Transport Strategic Plan (KLTSP), the transport blueprint for 2016 – 2025. The KLTSP is an important pillar of the ASEAN Economic Integration, which aims to make the region stronger and more competitive.

“It is through transportation projects and policies that we make this region a little smaller and a lot more united. By building transportation networks and connecting our cities by air, land, and sea, we empower different industries and businesses. More importantly, we empower our people,” de Guzman said.

Other transportation projects in the agenda include the establishment of an ASEAN Roll-on Roll-off Shipping Network, ASEAN Single Shipping Market, ASEAN Single Aviation Market and other air services agreements, and development of sustainable transport-related policies and strategies.

Transportation Secretary Arthur Tugade, ATM Chairman, underscored how these efforts are consistent with the direction taken by the Duterte administration in terms of transportation infrastructure.

“The Philippine government concurs to the fact that the failure to invest, means failure to grow and develop our social and economic fabric,” Tugade said. “We’re using the battle cry build, build, build, which aims to solve issues on lack of employment, high price of goods, traffic, and transportation. The Philippine government aims to build more railways, urban mass transport, airports, seaports, more bridges and roads, and new and better cities.”

After STOM plenary sessions and discussions with dialogue partners, the ATM will convene from November 17 – 18 to adopt recommendations made by the senior transport officials.
*Photo from GMANetwork.com

What It Takes to be the Best Network in India: Understanding the Latest Opensignal Report