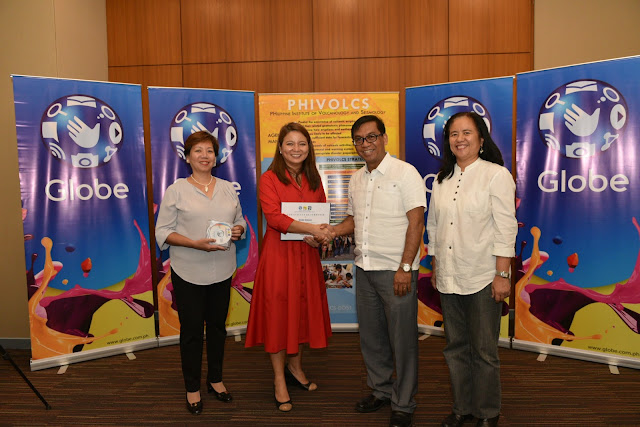 Wazzup Pilipinas!
Globe Telecom has teamed up with the Philippine Institute of Volcanology and Seismology (PHIVOLCS) in developing data base for 56 provinces. The information are integrated with the PHIVOLCS-developed Rapid Earthquake Damage Assessment System (REDAS) software, a tool which can be used in developing hazard and risk information.

REDAS, a hazard simulation software of PHIVOLCS that aims to produce seismic hazard and risk maps immediately after the occurrence of a potentially damaging earthquake, can be used as a tool for emergency preparedness, and contingency planning, Globe Chief Finance Officer and Chief Risk Officer Rizza Maniego-Eala said.

“Globe Telecom, as a telecommunications provider, is cognizant of the fact that availability of telecommunication services especially during times of emergencies is critical not only in minimizing casualties but also in providing rescue and rehabilitation efforts. We hope that the effective utilization of REDAS can provide deeper understanding and appreciation of earthquake hazards and risks that will hopefully lead to a more comprehensive planning and active formulation of an effective disaster prevention program and policies that will benefit not only service providers like Globe but also the entire country,” Eala said.

Specifically, Globe provided financial support for the creation of the additional REDAS hazard database. The built-in database consisted of multi-hazard maps from PAGASA and the Mines and Geosciences Bureau (MGB) as well as census and base maps from government institutions.

With the completion of the project, Globe is now able to access hazard maps for about 95% of its cell sites nationwide. This means the company will have applicable geographic scenarios in specific areas in relation to ground rupture, ground shaking, earthquake-induced landslides, tsunami, liquefaction, rain-induced landslide, flooding, storm surge and volcanic hazards, Eala said.

Globe Telecom’s support for the development of the REDAS project is also in support of its business continuity initiative, noting that the availability of hazard maps could also be used as a basis in determining the threats to the company’s corporate offices, employees’ whereabouts and safety as well as technical sites and stores.

REDAS was conceived in response to the country’s experience during the July 16, 1990 earthquake and taking into consideration typical situation when a large-magnitude earthquake occurs. Such situation includes a breakdown of communication facilities, disruption of power supply and isolation of affected areas through collapse of bridges and blockade of road networks by landslides. However, delay of information about a disaster-affected areas also hampers rescue and relief operations.

The Mysterious and Majestic Atacama D…
The Friday Roundup – Speech to Text, …
Thinking on whether or not you should…
Useful Tips for Building a Stronger C…
Casey Veggies On New Endeavors, His S…


This post first appeared on Wazzup Pilipinas News And Events, please read the originial post: here
People also like
The Mysterious and Majestic Atacama Desert: A Guide to Visiting this Unforgettable Place
The Friday Roundup – Speech to Text, Text to Speech and Subtitles.
Thinking on whether or not you should get into crypto? Read this!
Useful Tips for Building a Stronger Company Culture
Casey Veggies On New Endeavors, His Start With Odd Future, & Beef With Former Business Partner
What do the Great Commission and plastics have in common?
Baby Botox Training