The Alyan Robin Hood Fan Art That Borrowed From Arrow 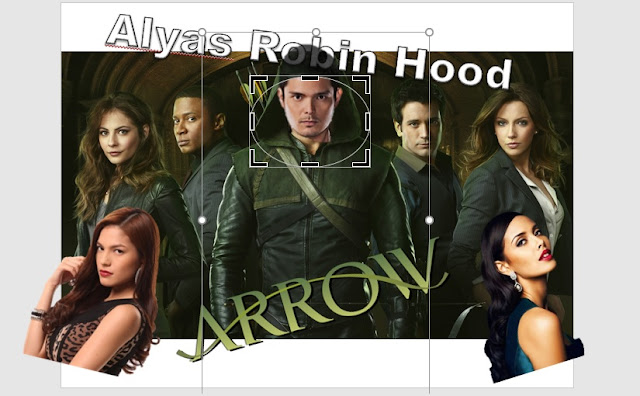 With regards to Alyas Robin Hood being a copycat or not, maybe in the future we could all try to steer away from the familiar or overused concepts, or in this case, characters... so our projects will not be perceived as recycled or copied.

This thinking is evident to how the fan art was created. The artist may have quickly connected or associated it to Arrow thus that is where he patterned his artwork, which also gave the readers the false impression that Alyas Robin Hood is merely a copied version of Arrow.

Even the video teasers were perceived to have similarities to how Arrow is presented on the Hollywood TV series thus being seen as clearly influenced by the same.

Claiming the Pinoy TV show is in reference to the original Robin Hood may not be totally believable since Robin Hood does not usually roam the land during night time (as depicted in most movies where he and his merry men robs from the rich during daytime). Please correct me if I'm wrong.

In any case, let us say I'm trying to research on a possible idea for a fan art for Alyas Robin Hood, would a Google search for Robin Hood bring out Arrow as a result? It would not. At least on the first page results. Closes to Hollywood works would be the movies starred by Kevin Costner, Russel Crowe, etc.
Top of mind, especially for millennials, would be what is currently, or was lately, shown. Thus, we can easily deduct that the artist really patterned his work after an Arrow poster since that's probably what was first on his mind when he saw the video teasers, and Googled for the Arrow TV series instead.

GMA 7 should realize that the popularity of "Arrow" would obviously connect to Alyas Robin Hood since it's the most recent image of the original, may it be Robin Hood or any other hooded hero with a bow and arrow. It is not surprising that people will think first of Arrow, and accuse Alyas Robin Hood as a copycat even if the story is totally different.

LionhearTV should not have used GMA 7's logo in their own poster because it somehow implies that they are in partnership with the TV station in the creation of the poster, or even the TV series itself. They maybe doing this kind of thing for years, but that could also mean fans have probably thought that their fan arts were actual part of the promotional campaign materials of the TV series or movies.

The lay out of the logos ( LionhearTV at the left and GMA7 at the right) is somehow deceiving to those not familiar of their usual works. Similar layouts would mean that both share ownership of the event, project, campaign, etc. just as in media partnerships where all the logos of sponsors and partners are shown on the posters, banners, streamers, etc.
Maybe they should either mention it is a fan-art or put their logo somewhere else to clearly indicate it is their own fan art. Many of their readers probably believed the previous fan arts were part of the campaign or promotional efforts of the TV or movie production. Nowadays, not too many could differentiate the real from the fictional or satire.

The Alyan Robin Hood Fan Art That Borrowed From Arrow