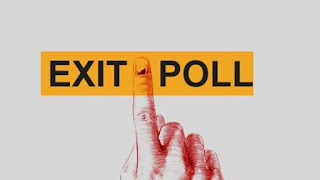 Elections to the Assemblies of Assam, Kerala, Puducherry, Tamil Nadu and West Bengal states have started or completed on April 6, 2021. As these elections have the highest significance in deciding the fate of ruling BJP, the Congress and other local parties in India, the people are very anxious to know the outcome of these polls. Especially at a time when the petrol prices have crossed Rs. 100 per liter and cooking gas prices about Rs 1000 a cylinder, and the unsolved farmer's strike for their rights for more than 100 days... BJP is facing people's ire throughout the country.

Usually immediately after closing the voting process, numerous agencies and media companies appear with their exit poll results to allay the curiosity of the people particularly the party activists temporarily to some extend. These results may become slightly correct or hugely false. But they give a short-term comfort to one and all concerned.

This time as usual people started searching for 'exit poll results' in Google and other search engines immediately after the conduct of Kerala, Tamil Nadu and Puducherry Assembly Elections that were conducted in a single phase on 6th April 2021. Assam assembly elections were conducted in three phases starting on March 27 and ending on April 6. But the elections to West Bengal were planned in many prolonged phases by the election commission starting on March 27 and stretching till 29th April, 2021. Many people opine that this is in accordance to the wishes of the prime minister Modi and his party BJP to reap unduly advantage from West Bengal this time.

The election commission has banned conducting and/or telecasting exit polls or opinion polls till the total completion of the elections. Hence 2021 exit poll results will be published after the closing of the last phase of Bengal elections ie at 7.00 pm on 29th of this month. The actual counting of votes is on 2nd May 2021 and the results will be declared on the same date.