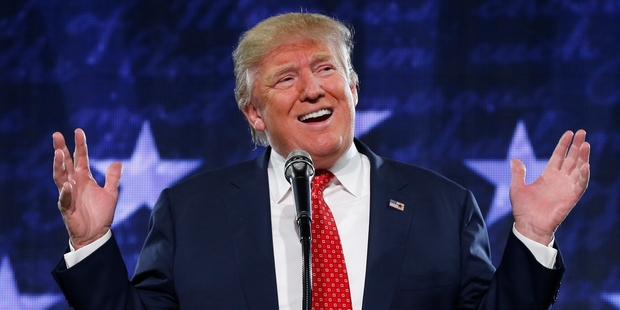 Knowing Donald Trump is seen as a problem for the Peale family. Photo / AP
Donald Trump likes to cite an exalted force when he's asked about his religious convictions.
God?
Jesus?
Himself?
Try Norman Vincent Peale, the Christian minister whose book, The Power of Positive Thinking, was a pillar of American self-help culture during the 1950s and beyond.
Or "the great Norman Vincent Peale", as the Republican frontrunner refers to the preacher, who ministered to Trump and his parents before his death in 1993.
The feeling towards Trump is not exactly mutual among Peale's offspring.
John Peale, 79, the minister's son, said he winces when Trump invokes his father's name, as the candidate has several times since launching his presidential campaign.
"I cringe," Peale said in a phone interview. "I don't respect Mr Trump very much.
I don't take him very seriously. I regret the publicity of the connection. This is a problem for the Peale family."
The Trump and Peale clans have history. Norman Vincent Peale presided at Trump's wedding to Ivana Trump. He also officiated at the wedding of Trump's sister Maryanne. The mogul co-hosted the minister's 90th birthday bash.
It wasn't until the past year, after Trump launched his White House bid, that John Peale, a retired philosophy professor in Charlottesville, Virginia, started forming less-than-positive opinions about the developer.
In particular, Peale said, he fears that Trump associating himself with Norman Vincent Peale suggests to the public that the minister emphasised "material success, and that was not the main characteristic of his ministry, big time". "I don't think the image of Norman Vincent Peale that comes through Donald Trump is any connection to the idea I have of him," said Peale, an ordained minister who described himself as a Democrat. "He doesn't recognise the significant character of Dad's ministry, which is a sincere desire to help people."
Trump, in a telephone interview, responded that he does not know John Peale and instead praised Peale's father as a "great gentleman and a wonderful person". He said he was a young man, perhaps a teenager, when he first heard Norman Vincent Peale preach.
"He would give the best sermons of anyone; he was an amazing public speaker," Trump said. "He could speak for 90 minutes and people were upset when it was over."
Trump said he was drawn to stories the minister told in the pulpit about successful business executives "overcoming difficulties". "I found that very interesting," the billionaire said, adding that he and Peale became friends. "He thought I was his greatest student of all time."
Trump, who has described himself as a Presbyterian, has cited Peale and touted The Power of Positive Thinking during interviews when asked about the role of faith in his life and whether he has ever sought God's forgiveness.
Twice divorced, unapologetically crude and the owner of casinos bearing his own name, Trump would never be confused for a Bible salesman. On Tuesday, during an appearance at Liberty University, which was founded by evangelist Jerry Falwell, Trump cast himself as Christianity's defender, even as he drew snickers when he incorrectly referenced the Bible's Second Corinthians as "Two Corinthians". By invoking Peale, Trump has something ecclesiastical he can talk about as he seeks support in the faith community, an all-important voting bloc.
"The great Norman Vincent Peale was my minister for years," Trump told CNN's Anderson Cooper last July, a sentiment he repeated in Atlanta and in Iowa during stops in Ames and Dubuque.
Peale, for his part, described Trump during the 1980s as "kindly and courteous" with "a streak of honest humility", and touted him as "one of America's top positive thinkers and doers". The minister also called Trump "ingenious" and predicted he would become "the greatest builder of our time".
Trump's parents, Fred and Mary Trump, formally joined Peale's Marble Collegiate Church in Manhattan - a venerable affiliate of the Reformed Church in America - during the 1970s. Trump visited Marble Collegiate with his second wife, Marla Maples. (Newspaper accounts have reported that Trump's adulterous relationship with Maples began at Marble Collegiate, though Trump said in the interview that it all started at a party.)
Discussing his religious views last August, Trump told reporters, "I go to Marble Collegiate Church." But the church issued a statement that Trump was not an "active member".