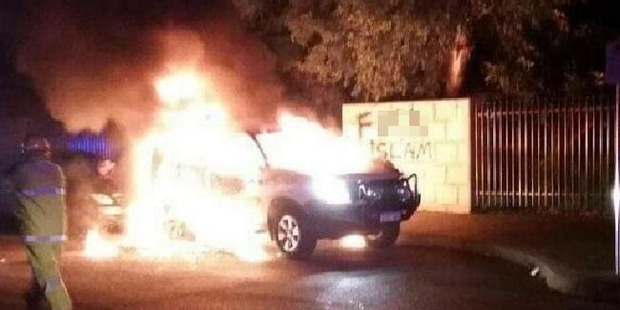 Worshippers found the burning 4WD after hearing a loud bang. Anti-Islam graffiti was sprayed on the mosque's walls. Photo / AP
A suspected petrol bomb exploded outside a crowded Perth mosque last night in what has been called a deliberate "criminal act of hate".
The explosion happened outside the Thornlie Mosque near the Australian Islamic College while hundreds of people were inside worshipping.
When they rushed outside they found a 4WD on fire and that anti-Islamic slogans had been sprayed on the mosque walls.
Worshippers reported hearing a loud bang at about 8pm last night, the West Australian reported.
Yahya Adel Ibrahim, from the mosque, wrote on Facebook that "a suspected petrol bomb" was to blame and "hate fuelled graffiti put on the wall".
"Thankfully our community won't start hating and playing blame games and singling out groups of people in our society. This, undoubtedly is a criminal act of hate, but it is the act of a person or group not the greater whole," Mr Ibrahim said.
"I know the outpouring of support from the community will be overwhelming because Perth has the best, kindest, and most warm-hearted people."
He thanked police and firefighters for the way they responded to the attack.
Get more trending information on Jokpeme News - Europe,US,Middle East,UK,Asia,Africa, Latin America,Entertainment & World News