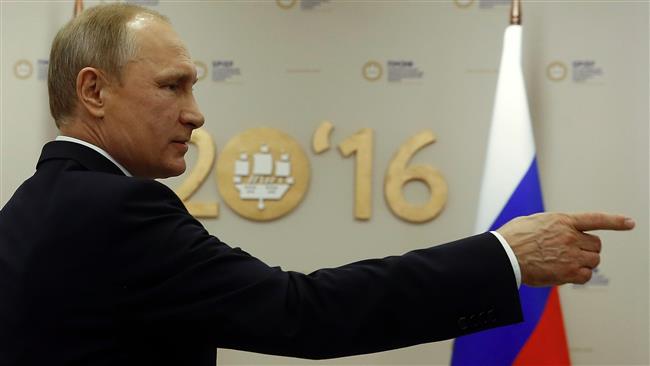 Russian President Vladimir Putin gestures during the St. Petersburg International Economic Forum (SPIEF 2016) in Saint Petersburg on June 17, 2016. (AFP photo)
President Vladimir Putin says Russia has not influenced the Brexit, dismissing as “groundless” claims by the British Prime Minister that Moscow is interested in the UK leaving the European Union.
"Statements made by the UK Prime Minister, Mr. [David] Cameron, before this plebiscite, before this referendum, on Russia's stance, have no basis and never had. I believe that this is nothing more than a flawed attempt to influence the public opinion in his own country. As we see, it didn't even have the desired result," Putin said on Friday.
He also underlined, following the Shanghai Cooperation Organization (SCO) summit in Uzbekistan, that the Brexit is Britons’ choice and Moscow has never interfered in the issue.
"Prior to the vote in the United Kingdom and after the vote, I have already said that we have never interfered, never discussed this, we acted very properly in my opinion. Of course, we closely followed what was going on, but did not influence this process and did not even attempt to do so."
Putin also slammed claims that Russia would welcome the UK's exit, saying such claims "show low level of political culture."
He also attributed the outcome of the vote to Britain's discontent with the flow of refugees and security concerns as well as unhappiness with EU bureaucracy. 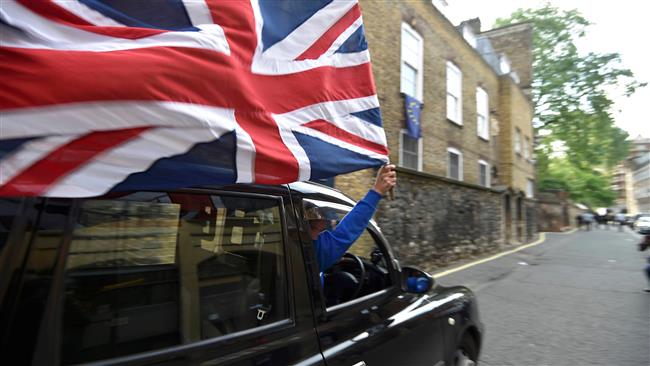 A taxi driver holds a Union flag as he celebrates following the result of the EU referendum, in central London, Britain June 24, 2016. (Reuters)
The Russian president further said the Brexit will have both positive and negative consequences for Russia and the world, noting that the situation will correct itself in the near future.
However, he ruled out that the results of the UK referendum will affect Sanctions imposed by the European Union against his country.
"As for the sanctions policy, I don't think that this move [Brexit] will affect our relations with the EU in this regard. We were not the ones who started these sanctions, we just responded on actions toward our country."
Russia has been targeted by a series of Sanctions Imposed by the United States and European Union over allegations that Moscow is arming and supporting pro-Russia forces fighting in eastern Ukraine. The Kremlin, however, has strongly rejected the accusations.
"I want to emphasize that if our partners decide to start a constructive dialog on this issue [sanctions], we are ready for this, we want this and we will respond positively on a positive decision," Putin said.
A majority of Britons voted on Thursday to leave the EU after 43 years of membership, with some 52 percent of British voters opting to leave the EU and roughly 48 percent of people to stay in the union.
The British prime minister announced his resignation after the UK's vote but said he would remain in office until a new premier could take the helm by the end of October.

What Your Sexual Dreams Can Tell You
5 Tips in Protecting Your Online Priv…
Top 5+ Best Urgrove Alternative Sites…
Best Organic Coffees That Are Healthy…
How and Why America Was Hit So Hard B…
Get more trending information on Jokpeme News - Europe,US,Middle East,UK,Asia,Africa, Latin America,Entertainment & World News