World could descend into war if UK leaves EU: PM 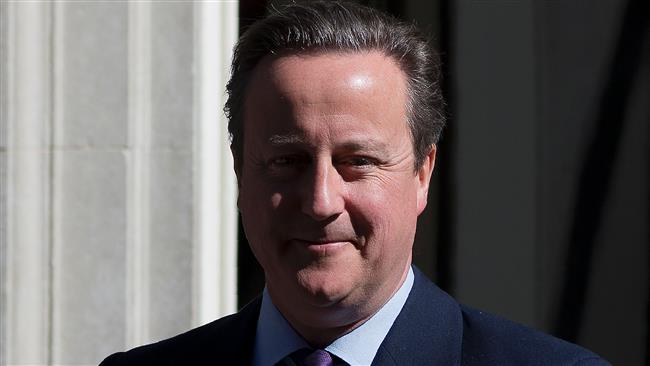 British Prime Minister David Cameron leaves 10 Downing Street in central London on May 4, 2016. (AFP photo)
Britain’s possible exit from the European Union (EU) will increase the risk of another world war, Prime Minister David Cameron will warn in a speech later on Monday, leaving no stone unturned in opposing the so-called Brexit.
Britons are set to decide their country’s future in the 28-member bloc in a referendum on June 23.
As he hits the 'Remain' campaign trail on Monday, Cameron will refer to Britain’s role in two world wars, arguing that international cooperation is vital to end lengthy conflicts, British media reported.
He will talk about the high cost awaiting his country down the line if "we turn our back" on the EU.
"Whenever we turn our back on Europe, sooner or later we come to regret it. We have always had to go back in, and always at much higher cost," he will say.
Cameron will further warn that “either we influence Europe, or it influences us. And if things go wrong in Europe, let’s not pretend we can be immune from consequences.” 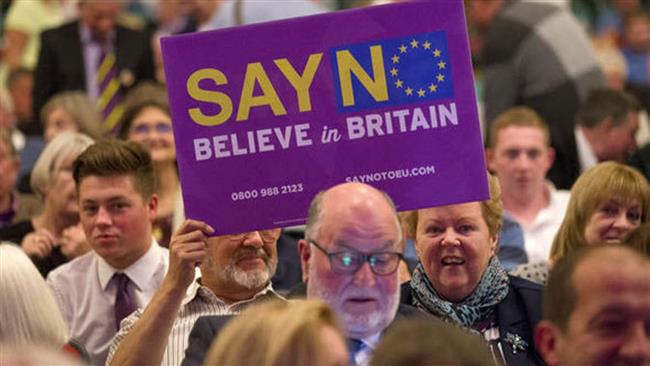 The premier will raise questions about the EU’s future in the absence of Britain in a leadership role, asking “can we be so sure peace and stability on our continent are assured beyond any shadow of doubt?”
European Commission head Jean-Claude Juncker has echoed Cameron, warning of “unforeseeable consequences” for the EU should Britain leave.
“Brexit” would “surely have unforeseeable consequences on European cooperation, about which I absolutely do not wish to speculate about because I am convinced that Britons will make the reasonable decision,” he said in an interview with the Funke Mediengruppe press group to be published on Monday.
George Osborne, the head of the British Treasury, warned Sunday that leaving the EU would be "catastrophic" for jobs.
Britain first joined the then European Economic Community (EEC) in 1973, a membership that only 67 percent of the public backed in a referendum two years later. 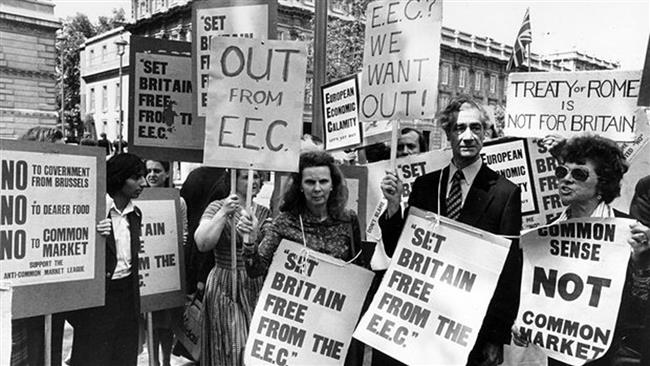 An anti-EEC rally in 1975 (file photo)
The impacts of a possible British exit on security, jobs, wages and trade are a key battleground for both the "Remain" and "Leave" campaigns.
Also, US President Barack Obama has demanded that the UK stay in the EU, saying an exit would send London to “the back of the queue” in terms of trade deals with Washington.

World could descend into war if UK leaves EU: PM