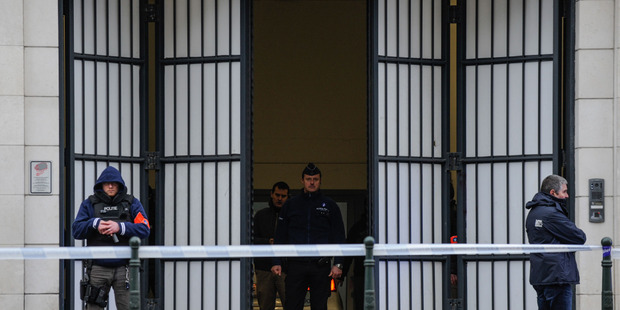 Police stand guard outside the court where suspects in the Paris attacks were expected to meet the prosecutor. Only Amin Choukri and Salah Abdelslam's lawyer showed up. Photo / The Washington Post.
The French interior minister said that Police on Thursday foiled a terrorist plot by arresting a man believed to be at "an advanced stage" of planning an attack on French soil.

Wanted man discovered living in Pilla…
CBD 2020: What to Expect + Our Top Pr…
What Marathon Running and Successful …
Vechain Blockchain Technology Powers …
The suspect, a French citizen, was at a high level of a terrorism network, said Interior Minister Bernard Cazeneuve, and the arrest was the culmination of an investigation that lasted several weeks. But Cazeneuve said that there was no apparent link to the Brussels attacks.
The French arrest came as the Belgian prosecutor's office announced six arrests in Brussels's Schaerbeek and Jette neighborhoods, part of its investigation into Tuesday's attacks. Belgian authorities have been scrambling to track down suspects who remain at large as they confront accusations that they had failed to disrupt the plot that claimed dozens of lives this week.
It was not immediately clear whether those arrested had participated in the attacks at Brussels Airport and on a subway car.
Belgian authorities still have not nailed down how many attackers were involved and how many people are on the loose as it became clearer that the Brussels attacks had links to the November massacre in Paris.
A top European Security official warned Thursday that the threat of Islamic State attacks is greater than previous assessments, underscoring calls for tighter security even as police widened the hunt for accomplices in the Brussels blasts.
Rob Wainwright, chief of Europol, said that the terrorist group has adopted a "more aggressive" posture toward Europe and that security authorities were focused on about 5,000 suspects who had become radicalized in Europe and traveled to Syria to fight. Many have now returned.
"We are faced by a more dangerous, a more urgent security threat from so-called Islamic State," Wainwright told the BBC on Thursday. "It threatens not just France and Belgium but a number of European countries at the same time. . . . It is certainly the most serious threat we have faced in at least a decade." Police guard a checkpoint and man positions during a police raid in the suburb of Schaerbeek in Brussels. Photo / AP
Wainwright spoke ahead of an emergency session of European security chiefs in Brussels. European leaders have been criticized for not acting more quickly to integrate security strategies and were under pressure Thursday to produce results.
The bloodshed struck directly at "the liberty upon which the European project was built," Belgium's prime minister, Charles Michel, said in a speech to mark a national day of mourning.
Meanwhile, police pressed ahead with a manhunt for a suspected accomplice who is believed to have fled Tuesday's attack at Brussels Airport.
The French newspaper Le Monde and the Belgian broadcaster RTBF reported that video monitors had captured images of another possible accomplice, who is believed to have slipped away on the Brussels subway. The report could not be immediately confirmed.
Criticism has also been leveled at the Dutch government, which on Thursday released a letter from Turkish authorities announcing their decision to deport Ibrahim el-Bakraoui to the Netherlands in July, after he was apparently detained at the Turkey-Syria border.
Turkish President Recep Tayyip Erdogan had said Wednesday that Turkey explicitly warned Dutch authorities that Bakraoui was "a foreign terrorist fighter."
But the letter does not explain why Bakraoui was deported, and Dutch Justice Minister Ard Van Der Steur said Turkey did not explain its decision. Because Bakraoui was not on any watch lists at the time and because he had a valid Belgian passport, van der Steur said, "there was no reason to take any action."
In a sign of the intense pressure on Belgian authorities after what are widely regarded as a host of security failures in the lead-up to Tuesday's attacks, the country's interior and justice ministers offered to resign Thursday, according to Belgian news media reports. Police officers block a street in Argenteuil, northwest of Paris, as security forces locked down the area during a major search, France's interior minister said. Photo / AP
Both Interior Minister Jan Jambon and Justice Minister Koen Geens have come under criticism for their departments' inability to disrupt the terrorist cell before it struck, despite links between the Brussels plotters and the attackers in Paris in November.
The Brussels attackers had been on authorities' radar. One of the men who would become a suicide bomber, Khalid el-Bakraoui, 27, had even been subject to an international arrest warrant. The Belgian prosecutor's office said Thursday that the warrant was issued Dec. 11 and that he was wanted for using a false name to rent an apartment in the Belgian city of Charleroi that was used as a hideout for the Paris attackers.
A photo, released to Turkish media Thursday, showed a police mug shot of the elder Bakraoui - smiling and unshaven, wearing a dark T-shirt - prior to his deportation to the Netherlands in July.
A variety of personal details about the bombmaker trickled out on Thursday. Najim Laachraoui, hailed in an Islamic State video for devising the explosive packages that killed 31 people in Brussels, was once a Catholic schoolboy and his younger brother has become an international Taekwondo competitor.
Yet a news conference Thursday with the bombmaker's brother and an interview with the director of the Catholic school did little to shed light on what led Laachraoui, described as a good student and "kind and intelligent" brother, down the path so many others have followed to violent extremism.
The Catholic school in the ethnically mixed Brussels neighborhood of Schaerbeek welcomed non-Catholics. "He was a good student," recalled Veronica Pellegrini, the director of the Institut de la Sainte-Famille d'Helmet. Pellegrini said he spent six years at the school and studied humanities.
In an interview, Pellegrini said the school never asks the students what religion they observe. And she said that the school has not heard from Laachraoui since he graduated in 2009.
The school's website describes its philosophy: "For us, school is a place of learning and a space for a common life. Each student acquires knowledge and skills, learns to live and to work with others." On another page, describing the school's philosophy, it quotes from the Bible: "We know that we have passed from death to life, because we love our brothers. . . . Do not love in word or speech but in deed and in truth."
It was another fragment in the lives of violent Islamist extremists who grew up in Brussels in a manner that gave no hints at what they would later become.
Laachraoui's brother Mourad, a well-known athlete for his taekwondo skills, said that while his family was a practicing Muslim family, he did not notice any changes in his brother's behavior.
After Najim left for Syria, Mourad said that tried to find him and get him to return. He tried using Facebook, but Najim stopped using his real name. Their parents called the police in 2013 and saw police again in December after the Paris attacks.
Mourad said he felt sorrow for the victims of the bombings. Asked about his sports career, he said, "I want to continue my sports. I am fighting. I have always been fighting and I will continue fighting." As for his younger brothers and Syria, he said, "I am now the oldest one, and I will prevent the others from going."
Najim Laachraoui's DNA was found in a Brussels apartment raided last week. The discovery of a militant cell there eventually led to the arrest of Salah Abdeslam last Friday. Abdeslam is believed to have been involved in logistics for the Paris massacres, which claimed 130 lives.
After a court hearing Thursday, Abdeslam's lawyer, Sven Mary, said the suspected terrorist is not fighting extradition to France, reversing his earlier position. In response to reporters' questions, the lawyer said that the 26-year-old suspect had not known about the plans to attack Brussels and that his client "wants to leave for France as quickly as possible" so he can "explain himself."
Get more trending information on Jokpeme News - Europe,US,Middle East,UK,Asia,Africa, Latin America,Entertainment & World News