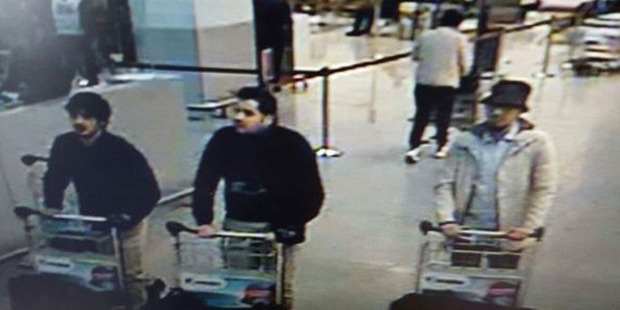 Belgian police sources have reportedly named the two airport suicide bombers as brothers Khalid and Brahim el-Bakraoui. Photo / AP
Brussels bomb Suspect Najim Laachraoui is still on the run after the blasts which killed at least 31 people and left more than 200 injured.

Wanted man discovered living in Pilla…
$50 Million Stolen from Upbit
How to Create a Winning Black Friday …
3rd Gen AMD Ryzen Threadripper 3960X …
10 Elite Special Forces From Around T…
An arrest in connection with the terror attack has reportedly been made in the Anderlecht suburb of Brussels, but local media reports that Laachraoui had been detained were later withdrawn.
Police were hunting him as a man seen with suspected Suicide Bombers at Brussels airport.
Belgian state broadcaster RTBF has identified two of the attackers who targeted Brussels as brothers Khalid and Brahim Bakraoui.
The report Wednesday says the brothers were known to police for past crimes, but nothing relating to terrorism.
REBF says Khalid El Bakraoui had rented an apartment raided by police last week in an operation that led authorities to top Paris Attacks suspect Salah Abdeslam.
Belgian media have tentatively named the third suspect as Najim Laachraoui, the Guardianreported.
Prosecutors said Laachraoui had been wanted by police since his DNA was found in properties used by the Paris attack cells last year.
He is reported to have travelled to Hungary with Abdeslam in September.
The Guardian reported it had recently emerged the el-Bakraoui brothers had clear links to the Paris attacks and the recent Brussels police raids - a development the newspaper said could raise serious questions about the failings of police and intelligence agencies.
The brothers from Brussels had a long history of organised crime in the Belgian capital, local station RTBF reported, and were among the suspects being sought since last week's raids.
One of the el-Bakraoui brothers had rented a flat in Forest, southwest Brussels, which had been raided a week before Tuesday's attacks.
Paris terror suspect Salah Abdeslam had been present at that raid and another cell member, Algerian Mohamed Belkaid, was shot by police. The Guardian reported an Isis flag and heavy weapons were found at the Forest address.
One brother had also rented out the Belgian hideout in Charleroi used by the Paris attacks team.
RTBF reported one of the el-Bakraouis was also believed to have provided weapons and ammunition for the attack on an Eagles of Death Metal rock concert at the Bataclan.

BRUSSELS UNDER ATTACK - WHAT WE KNOW