A photo of this Brussels bombing victim was on our homepage. Here's her story 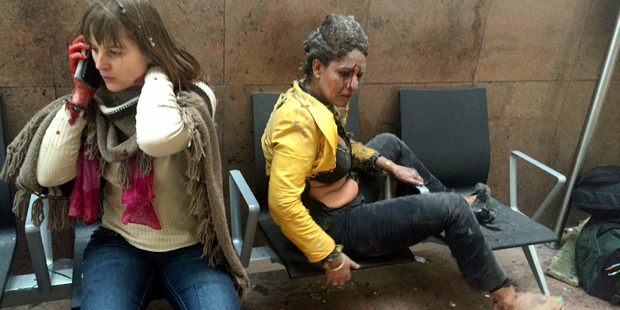 This photo has become one of the defining images of the Brussels tragedy. Photo / Ketevan Kardava
Ketevan Kardava was at the airport in Brussels on Tuesday, headed to Switzerland for an assignment. So she was there when the first explosion occurred, a blast that sent debris flying, she told Time magazine.

CBD 2020: What to Expect + Our Top Pr…
Nusa Islands vs Gili Islands 2020 {Wh…
The Ultimate Winter Bucket List Accor…
Little Net Big Net
EXODUS 1 Smartphone: Co-Developed By …
The airport filled with smoke and Dust, Kardava said, and all around, there were "dozens of people without legs, lying in blood".
"I couldn't believe I still had my legs," said Kardava, a special correspondent for the Georgian Public Broadcaster network. "I was in a state of shock."
Then, another explosion struck.
People inside the airport tried to dash to safety, Time reported.
Kardava told the magazine that she wanted to run, too.
"But I also wanted to take pictures," she said. "As a journalist, it was my duty to take these photos and show the world what was going on. I knew I was the only one at this spot."
You've probably seen at least one of Kardava's photographs from Tuesday's attacks, which left more than 30 people dead and more than 200 injured.
One ran on the front page of The Washington Post. It was also on the front page of the New York Times, the Wall Street Journal, USA Today, the Guardian, Der Standard, Folha de S. Paulo, Le Journal de Quebec and scores of other newspapers.
The  picture shows two women, one of them in ripped clothes, missing a shoe, covered in dust, with blood running down her face.
"She was in shock, speechless," Kardava told Time.
Kardava didn't get her name but told Time that she hoped the woman would be able to "overcome all these difficulties".
The woman has now been identified by several media outlets as Nidhi Chaphekar, a Jet Airways employee.
The Times of India reported that Chaphekar's family learned she was hurt in the blast, then "stayed glued to the television after that, breaking into tears often".
They later learned that she had been hospitalised and was undergoing surgery, according to the newspaper.
The newspaper reported that Chaphekar's daughter would ask: "Mamma ka kuch pata chala kya?" - a question that translates to "Did you find any news about mom?"
"For the whole day we did not have any information. All they told us was she is safe," Rupesh Chaphekar, Nidhi's husband, told the Times of India. "But how do I know if they are not just giving us false hopes? I just want to hear her voice once. Only the airline's base manager is contacting us with information. We are not able to get through any of the helpline numbers."
Jet Airways did not immediately respond to an email from The Post on Wednesday.
- Washington Post
Get more trending information on Jokpeme News - Europe,US,Middle East,UK,Asia,Africa, Latin America,Entertainment & World News

A photo of this Brussels bombing victim was on our homepage. Here's her story