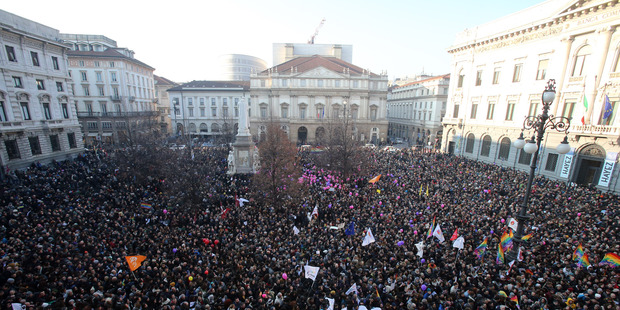 People gather during a gay rights demonstration in Milan, Italy. Photo / AP
Italy has postponed voting on legislation that offers homosexual couples legal recognition as some allies of Prime Minister Matteo Renzi pushed for the removal of a provision that allows limited adoption rights.
This latest delay represented a setback for Renzi, who had promised to enact the law last year but has faced implacable opposition both within parliament and from the Roman Catholic Church, which continues to wield great influence in Italy. 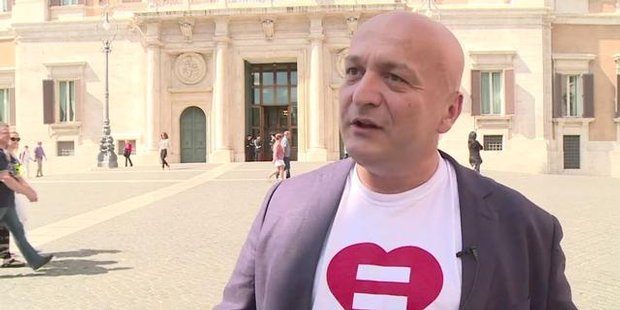 Fearing possible defections by Catholic members of the ruling centre-left Democratic Party (PD) during secret voting on a battery of amendments on Wednesday, the PD chief whip in the Senate, Luigi Zanda, asked to put off the scheduled voting until next week.
The delay would allow "a period of reflection so we can pull the political threads back together and find the path that allows us to proceed in an orderly fashion", Zanda said.
The bill was debated for only a few hours on Tuesday and Senate President Pietro Grasso said the discussion would restart on February 23 at the earliest.
Italy is the only major Western country that has not yet recognised civil unions for gay or heterosexual couples, continuing to withhold from them legal protections such as inheritance rights.
Much of the opposition has focused on a provision that would allow unmarried couples to adopt their partner's children.
Critics say this would encourage surrogacy parenting, which is illegal in Italy.
Latest polls have suggested some 70 per cent of Italians support civil unions. However, only some 24 per cent think same-sex couples should be granted adoption rights.
Hundreds of thousands of Italians protested against the legislation last month in a Rome rally backed by the Church.
Showing how polarised the country is, there have also been large rallies in favour.
Get more trending information on Jokpeme News - Europe,US,Middle East,UK,Asia,Africa, Latin America,Entertainment & World News