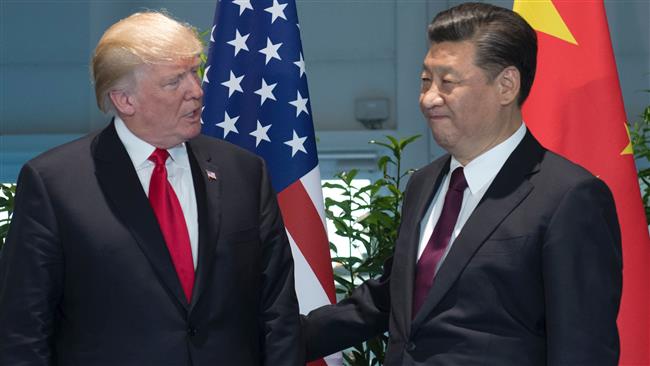 US President Donald Trump and Chinese President Xi Jinping (R) pose prior to a meeting on the sidelines of the G20 Summit in Hamburg, Germany, July 8, 2017.(Photo by AFP)
US President Donald Trump and Chinese President Xi Jinping have discussed escalated tensions regarding North Korea.
In a phone discussion, President Xi urged Trump to avoid rhetoric or action that would worsen tensions on the Korean Peninsula, according to Chinese official media on Saturday.
The US and North Korea, in past days, have gotten into a hot rhetoric, threatening to take military action against one another.
“At present, the relevant parties must maintain restraint and avoid words and deeds that would exacerbate the tension on the Korean peninsula,” Xi said as quoted by media.
He said China is ready to work with the US to appropriately resolve the issue.
Xi stressed that Beijing and Washington have common interests in achieving denuclearization on the Korean Peninsula and maintaining peace and stability in the region.
He emphasized that the concerned parties should be striving to resolve the issue through dialog and negotiation, trying to reach a political solution.
China is willing to keep close contacts with the United States, on the basis of mutual respect, to seek a sound settlement on the issue, Xi assured.
Chinese officials have repeatedly called for the resumption of 6-country talks between the two Koreas, China, Russia, Japan and the US on the denuclearization of the Korean Peninsula as the safe road to peace.
Trump, however, says he wants this decades-long problem to be resolved “quickly”.
He described North Korea as “ a country that has misbehaved for many many years – decades, actually – through numerous administrations, and they didn’t want to take on the issue and I had no choice but to take it on, and I’m taking it on. And we’ll either be very, very successful quickly or we’re going to be very, very successful in a different way, quickly.”
Trump, on Tuesday, threatened to unleash “fire and fury like the world has never seen” on North Korea if Pyongyang did not retreat.
“Military solutions are now fully in place, locked and loaded, should North Korea act unwisely,” he tweeted on Friday. 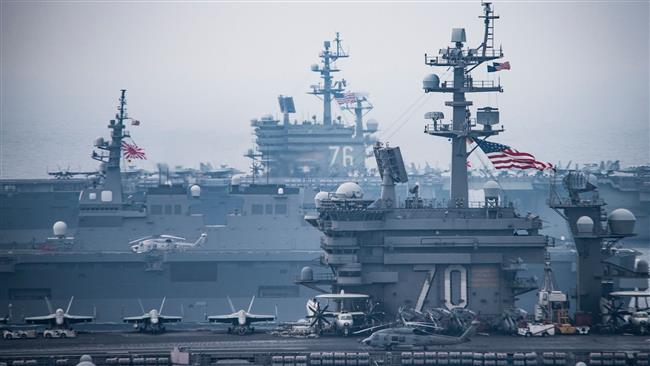 The handout photo released by the US Navy on June 1, 2017 shows the Carl Vinson strike group during a joint navel drill with the USS Ronald Reagan (CVN 76-in background) and Japanese ships in the Sea of Japan (also known as the East Sea), off the Korean peninsula.
Media outlets, however, reported later that a White House official had downplayed the significance of Trump's tweet, saying there were continuously updated military contingency plans for any global crisis, adding, “This isn’t anything new”.
The remark, however, triggered a collective outcry by world leaders, urging Trump to refrain from threats and provocations and instead take the diplomatic road to peace.