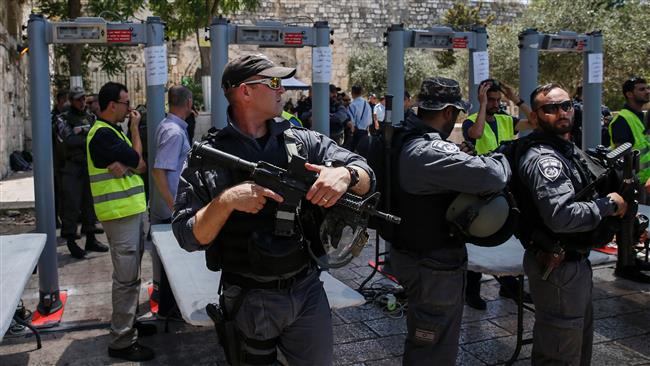 Israeli forces have attacked Palestinian worshipers at an entrance to the al-Aqsa Mosque compound, leaving 18 people injured.
According to Ma’an news agency, the mosque is still under Israeli control despite the reopening of some of its doors after the regime installed electronic gates at three entrances to the mosque and closed the others.

Putin is making the same mistakes tha…
The Book Depository – Atomic Habits b…
Minoxidil for Beard: Does It Really B…
Do Nootropics Actually Work?
How To Estimate The Crowdfunding App …
Israeli forces on Sunday reopened the al-Aqsa Mosque compound, which includes al-Aqsa Mosque and the Dome of the Rock, in East Jerusalem al-Quds two days after they closed it following a deadly shooting in the area.
Muslims, however, refused to enter the site in protest at the newly-imposed security measures, including metal detectors and cameras. Dozens of worshipers held prayers outside the compound, at the entrance near the Lions' Gate entry to the Old City.
Israeli forces attacked people outside the compound on Sunday. According to the Palestine Red Crescent Society (PRCS), 18 Palestinians sustained injuries. Four Palestinians were also arrested.
The report further said Israeli forces conducted inspections inside the mosque, inflicting damage on the place. They broke the locks of the drawers and safes under the pretext of inspecting the mosque, it said.
The Palestinian Islamic Jihad movement warned in a statement on Sunday afternoon that Israel will pay the price for the aggression and measures taken in al-Aqsa Mosque, stressing that Palestinians will defend al-Aqsa.
The statement also described the Israeli actions as a blatant aggression practiced in the absence of any action by Arabs and Muslims to stop Israel’s daily violations of the sanctity of al-Aqsa Mosque.
The occupied lands have witnessed tensions ever since Israeli forces imposed restrictions on the entry of Palestinian worshipers into al-Aqsa Mosque compound two years ago.
The Tel Aviv regime has been trying to change the demographic makeup of Jerusalem al-Quds by constructing settlements, destroying historical sites and expelling the local Palestinian population.
More than 300 Palestinians have lost their lives at the hands of Israeli forces since October 2015, when the tensions intensified.
Tel Aviv has come under fire for using violence against Palestinians and adopting a policy of shoot-to-kill. 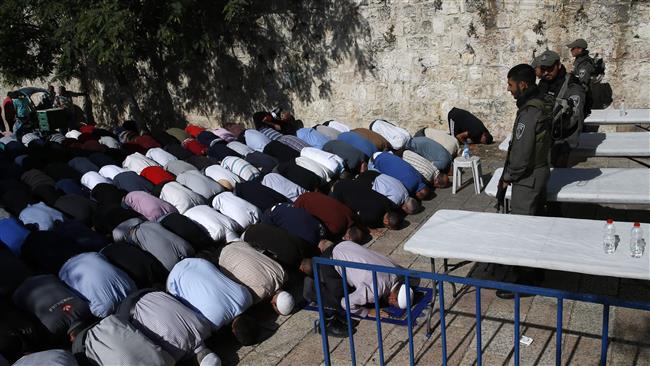 Palestinian Muslim worshipers, who refuse to enter al-Aqsa Mosque compound due to new measures by Israeli regime, pray near a main entrance to the religious site in the Old City of Jerusalem al-Quds, on July 16, 2017. (Photo by AFP)
Meanwhile, two rights groups protested against the closure of the Old City and its vicinity in Jerusalem al-Quds and the ban on Palestinians from entering it.
The Jerusalem Legal Aid and Human Rights Center (JLAC) and Adalah - the Legal Center for Arab Minority Rights in Israel - presented an objection to Israeli authorities as a preliminary procedure.
They said the Israeli measures are considered as collective punishment that violates the local and international laws.
The centers stressed that the measures violate the right to free movement and work and are also considered as racist as Israel allows the Jews to enter the compound but bans Palestinian residents of Jerusalem al-Quds from entering or opening their shops.
Israeli forces shoot fishermen off Gaza
Meanwhile, Israeli naval forces opened fire on several Palestinian fishermen south of the besieged Gaza Strip on Sunday night.
Ashraf al-Qedra, a spokesman for the Palestinian Ministry of Health in the Gaza Strip, said two of the fishermen sustained moderate injuries, identifying them as Ibrahim al-Jahjoh and Khedr Abu-Shamaleh.
The Israeli regime regularly shoots and detains Gazan fishermen over allegations of crossing the "designated fishing zone," which is practically three nautical miles.
Under a ceasefire agreement reached between Israelis and Palestinians following the deadly Israeli war in August 2014, Tel Aviv agreed to immediately expand the fishing zone off Gaza’s coast, allowing Palestinian fishermen to sail as far as six nautical miles off the shore. The agreement also stipulated that Israel would expand the area gradually up to 12 miles.
Palestinian fishermen, however, say the Israeli navy opens fire on them before they reach the agreed limit. About 4,000 fishermen work in Gaza, half of whom live below the poverty line.
The Gaza Strip has been under an Israeli blockade since June 2007. The blockade has caused unprecedented levels of unemployment and unrelenting poverty.
Get more trending information on Jokpeme News - Europe,US,Middle East,UK,Asia,Africa, Latin America,Entertainment & World News


This post first appeared on General Viral World News & Entertainment - Europe,US,Middle East,UK,Asia,Africa,Latin America., please read the originial post: here
People also like
Putin is making the same mistakes that doomed Hitler when he invaded the Soviet Union
The Book Depository – Atomic Habits by James Clear
Minoxidil for Beard: Does It Really Boost New Growth
Do Nootropics Actually Work?
How To Estimate The Crowdfunding App Development Cost?
4 Simple Ways to Decorate an Eco-Friendly Office
Why Are CBD Capsules Trending in the USA?
How to Get Rid of Mice – 5 Methods
What does it say when fewer than 50% of the people in America belong to a church?