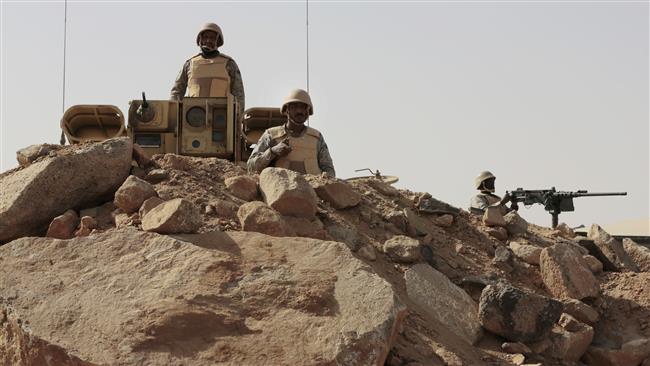 Saudi soldiers stand on top of armored vehicles, on the border with Yemen at a military post in Najran. (Photo by AP)
Yemeni army soldiers, backed by fighters from allied Popular Committees, have conducted a fresh missile attack against a military base in Saudi Arabia’s southern Najran region, killing six Saudi soldiers.
The Arabic-language al-Masirah television network reported on Thursday that the missile hit the al-Shabakah base.
Yemeni forces carried out a similar attack on the al-Farizah military base in Saudi Arabia’s southwestern Jizan region, which set the post on fire, the report added.
The Yemeni forces have recently stepped up their retaliatory assaults against Riyadh’s deadly war on the impoverished country.
Separately on Thursday, a Yemeni military source reported intense clashes between militants loyal to former president, Abd Rabbuh Mansur Hadi, and Houthi Ansarullah fighters in the Sirwah district of the central Ma'rib Province.
Six pro-Hadi militants and 14 Houthi fighters lost their lives in the clashes over the past 24 hours, the source added.
Yemen's Khabar news agency said a high-ranking pro-Hadi commander was among the casualties of the Ma'rib scuffles.
Other reports said dozens of Saudi mercenaries had been killed in the clashes. 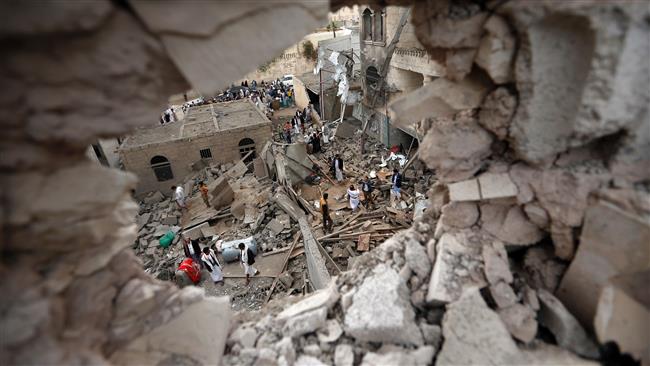 Yemenis stand on the rubble of houses destroyed in a Saudi airstrike in Sana'a on June 9, 2017. (Photo by AFP)
Saudi Arabia has been leading a brutal military campaign against Yemen for more than two years to eliminate the Houthi Movement and reinstall Riyadh-backed Hadi.
The Saudi aggression, however, has failed to achieve its goals and killed more than 12,000 Yemenis.
The Houthi movement, backed by the army and popular forces, has been defending Yemen against the protracted Saudi war. It has also been running state affairs since 2014, when Hadi resigned and fled to Riyadh at a time the country was grappling with threats from al-Qaeda terrorists.


This post first appeared on General Viral World News & Entertainment - Europe,US,Middle East,UK,Asia,Africa,Latin America., please read the originial post: here
People also like
Life Extension – Save on Premium Science-based Supplements + Free Shipping
Biden’s Ambitious Global Climate Agenda Is In Peril. Can He Save It?
7 Best Straight Razors for a Sharp, Close Shave (Ranked)
Is It Profitable To Develop A Prescription Discount App Like SingleCare?