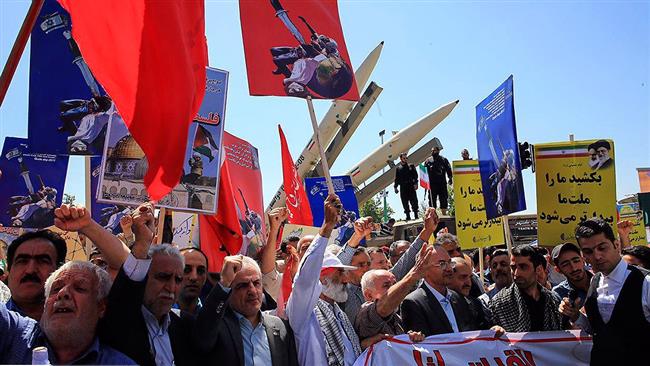 Millions of people have taken to the streets across Iran and other world countries to show their solidarity with the Palestinians and condemn Israel’s decades-long occupation and atrocities.
The Rallies are held to mark Quds Day, which falls on the last Friday of the Muslim fasting month of Ramadan.

It's Time To Rebuild
Life at 57 - Where I'm At
Muslim American servant NARRATOR
THE ENEMY OF THE UNLIVED MEANINGLESS …
10 Best Restaurants in St. Augustine
In Tehran and other cities and towns, people from all walks of life gathered for the annual event which usually marks people chanting slogans against Israel and burning the occupying regime's flags.
The occasion is a legacy of the late founder of the Islamic Republic Imam Khomeini, followed by Muslims in other countries to support the Palestinian struggle against Israel.
Iranian President Hassan Rouhani along with other senior Iranian officials took part in the Tehran rally.
Speaking on the sidelines of the event, Rouhani said “the message of Quds Day is that of hatred towards the occupying and usurping regime as well as support for the oppressed nation” of Palestine.

He underlined the importance of this year’s Quds Day “given the presence of terrorists in the region, who are backed by Israel,” adding people are determined to cleanse the region of Tel Aviv-backed terrorists.

Rouhani said the high turnout in the demonstrations also serves as a response to the United States, which has recently been seeking to pile pressure on Iran by tightening its sanctions.
During the rallies in the capital, Iran also put on display three surface-to-surface ballistic missiles, including the Zolfaghar, the type that Iran used this week to destroy Daesh positions in Syria. 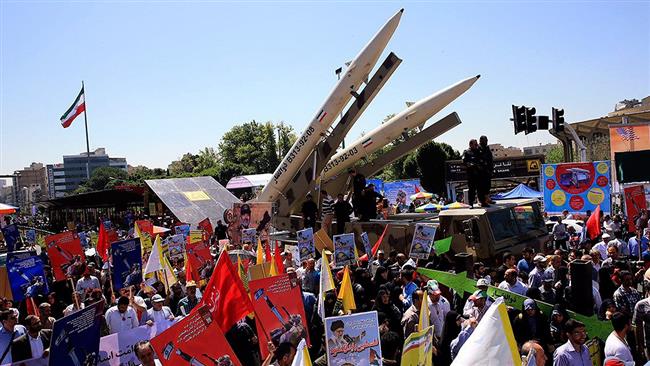 The Iranian Zolfaghar ballistic missile is displayed during the rally in Tehran, June 23, 2017. (Photo by Fars)
On Wednesday, Leader of the Islamic Revolution Ayatollah Seyyed Ali Khamenei emphasized the importance of Quds Day.
“It is not just that we are defending an oppressed nation that has been driven out of its home. We are actually fighting against an oppressive and arrogant political system,” Ayatollah Khamenei said.
Final communiqué
In a communiqué issued at the end of the rallies, the demonstrators renewed the call for the liberation of Palestine from Israeli occupation as an ideal of Iran’s 1979 Islamic Revolution.
They also vowed support for the “path of resistance and intifada” against the Tel Aviv regime, stressing the need for strong unity among different Palestinian factions to speed up anti-Israel struggles.
The only solution to the Palestinian issue, the communiqué said, is facilitating the return of displaced Palestinians to their homeland and holding free elections for the nation to decide its fate. 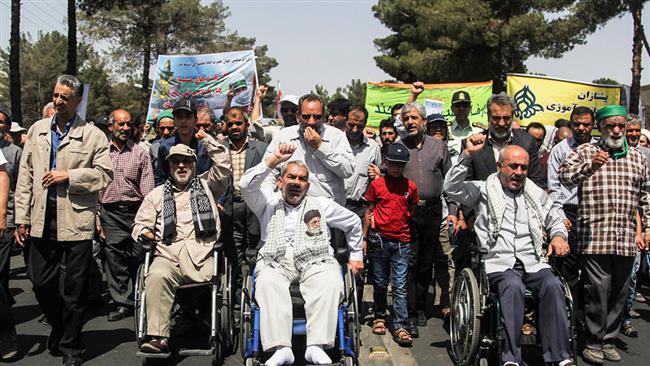 Iranian demonstrators mark International Quds Day in Birjand, June 23, 2017. (Photo by Mehr)
The communiqué also slammed Israel’s “attempts to Judaize the occupied territories and destroy Palestine’s national and historical identity, calling on international institutions to help foil the regime’s plots by taking firm and practical measures.”
As part of a joint plot, the US, Israel and regional reactionary regimes are supporting Takfiri terror groups, including Daesh, in an attempt to create a rift in the Muslim world and protect the regime in Israel, it added.
Half a century of occupation
Earlier this month, Palestinians marked the 50th anniversary of the 1967 Six-Day War, which saw Israel occupy the West Bank, East Jerusalem al-Quds, the Gaza Strip and part of Syria’s Golan Heights.
In November that year, the UN Security Council adopted Resolution 242, under which Israel is required to withdraw from all territories seized in the war. 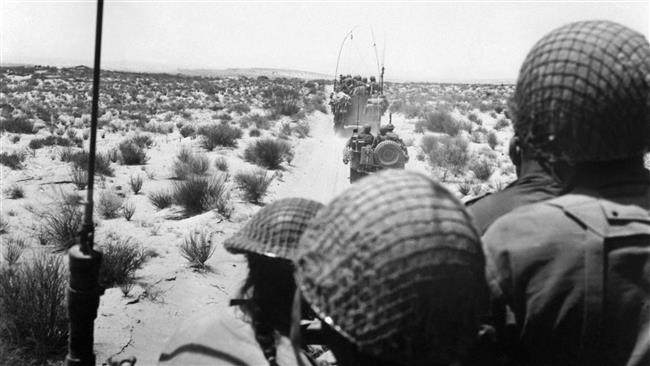 This file photo taken on June 1, 1967 shows Israeli armored forces in action in the Sinai Desert, Egypt. (By AFP)
Tel Aviv withdrew from Gaza in 2005, but has been keeping the coastal enclave under a crippling siege and regular deadly offensives. The regime has also been expanding settlements across the West Bank and East Jerusalem al-Quds in breach of international laws.
The global protests this year coincide with stepped-up killing of Palestinians, their forced displacement and abusive detention by Israel.
World in solidarity with Palestine
In the early hours of Friday, Bahraini people held anti-Israel rallies in different areas to commemorate Quds day. 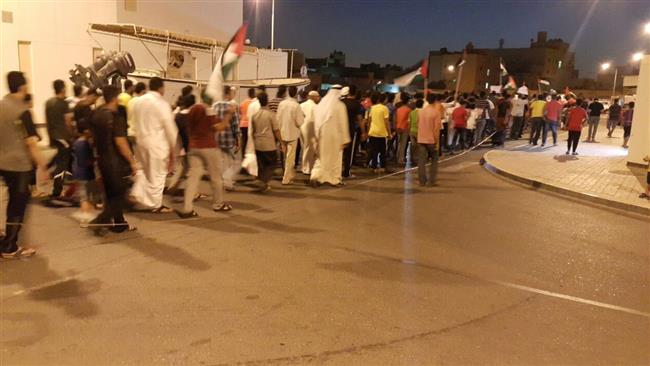