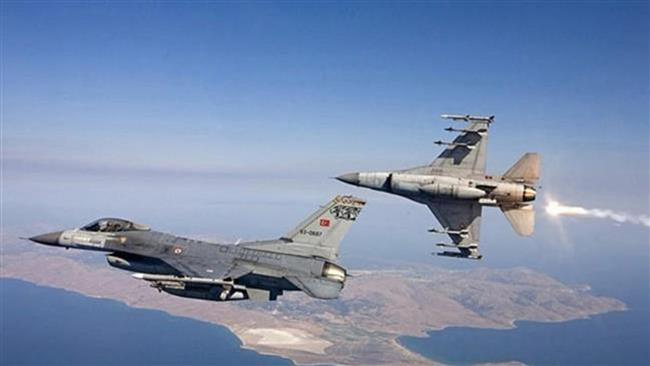 Turkish warplanes (file photo)
Turkish warplanes have bombed Northern Iraq in the latest attack inside the Arab country without coordination with the government in Baghdad.
The Turkish military said the warplanes struck seven targets in the Avasin-Basyan region of northern Iraq, and killed 13 militants of the outlawed Kurdistan Workers’ Party (PKK) on Sunday.
Those killed were believed to be preparing for an attack against Turkey, the military said in a statement.
In a separate airstrike in Turkey's southeastern province of Van late on Saturday, the military said warplanes had killed another 10 PKK militants.
PKK militants have been waging a bloody campaign in southeastern Turkey for decades, which has left more than 40,000 people dead.
Turkey regularly bombs the mountainous border area between Iraq and Turkey where PKK militants are based. Ankara has also deployed troops into the Iraqi soil, triggering a diplomatic crisis with Baghdad which brought them to the brink of a war at one point.
The troops are based in a town near the northern Iraqi city of Mosul, which is currently the focus of a massive operation to recapture it from Daesh terrorists.
Baghdad has repeatedly called on Ankara to withdraw its forces, describing the military presence as a violation of its sovereignty, and warned that the troops stood to complicate the Mosul battle. 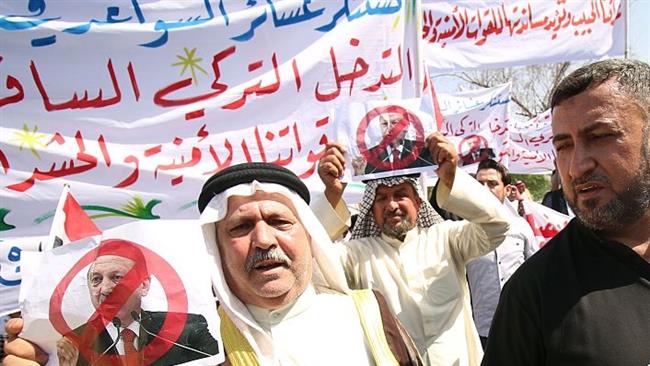 Iraqi tribesmen hold posters bearing a portrait of President Recep Tayyip Erdogan crossed out during a protest against the continued presence of Turkish troops in northern Iraq outside the governorate building in the southern city of Basra, October 16, 2016. (Photo by AFP)
Turkey deployed its troops to Iraq in December 2015, claiming that it was part of a mission to train Iraqi Kurdish forces in the fight against Daesh. Some 500 Turkish forces are said to be present at the Bashiqa military camp on the outskirts of Mosul.
​In April, Turkey’s pro-government Yeni Safak daily said Ankara planned to launch a military incursion into northern Iraq.
Dubbed Tigris Shield, the mission would involve thousands of tanks, vehicles and artillery pieces used in Turkey’s Operation Euphrates Shield in Syria, which ended in March after seven months, the report added.
Turkish President Recep Tayyip Erdogan said then Operation Euphrates Shield was only the "first stage" of what he called Turkey’s counter-terrorism battle, warning that the next phases of the operation would be broader, and include the Iraqi areas of Sinjar and Tal Afar.