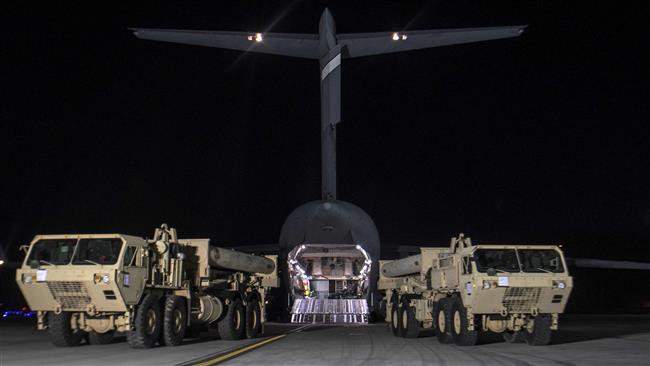 This handout photo from the US Forces Korea (USFK) taken on March 6, 2017 and released on March 7, 2017 shows the first elements of the US-built Terminal High-Altitude Area Defense (THAAD) arriving at Osan US Air Base in Pyeongtaek, south of Seoul, South Korea. (Photo by AFP)

Juvenile diabetes and life insurance
Moffat Camping and Caravanning Club S…
US deploys carrier strike group in mi…
Cat Coronavirus Diary – Day 16
Do you know which Countries Have esca…
China has once again emphasized its strong opposition to the deployment of a US missile system on the Korean peninsula, urging relevant parties to stop immediately.
"China has clearly expressed its stance of opposition to the THAAD (Terminal High Altitude Area Defense anti-missile system) deployment for many times,” said spokeswoman of the Chinese Ministry of Foreign Affair, Hua Chunying, in a regular press briefing in Beijing on Friday.
Beijing believes the THAAD deployment in South Korea will not only make the region unstable, but also trigger Pyongyang to take a more determined stance to safeguard its territories against foreign invasion.
Hua said Chinese leadership understands North Korea’s concern on safeguarding its own security, but, she added, “the problem is that THAAD will damage the regional strategic balance and is not conductive to safeguarding the peace and stability of the Korean Peninsula, but rather it may very well render the ROK [Republic of Korea, another name for North Korea] less secure.”
China is wary of the use of a special x-band radar system installed in THAAD.
"The X-band radar of THAAD can cover a detection range… far beyond the Korean Peninsula… and cover a vast territorial area of China,” the Chinese official said.
Beijing’s spokeswoman said the deployment of THAAD in South Korea would have a heavy toll on China’s "security and interests."
“We are not opposed to the ROK's adoption of necessary measures to safeguard its own security, but such measures should not be taken at the expense of security and interests of the neighboring friendly countries, including China," she said.
The end of patience
Beijing's Friday comments followed a strong warning by the United States to North Korea.
US Secretary of State Rex Tillerson warned that military action against North Korea would be "on the table" if Pyongyang elevated the threat level.
Tillerson, who is on a three-leg tour in northern Asia, said in South Korea on Friday that Washington's "patience has ended."
"Let me be very clear: the policy of strategic patience has ended," Tillerson warned Pyongyang from Seoul, adding, "All options are on the table."
"If they elevate the threat of their weapons program to a level that we believe requires action, that option is on the table," Tillerson said when asked about military action.
Tillerson will be in China on Saturday and Sunday, where he is expected to try to convince Chinese leaders to pressure North Korea to abandon its military programs. China is North Korea’s main ally.
The US has recently started the deployment of THAAD to South Korea, claiming it is an anti-missile system for defense against North Korea, which has conducted numerous ballistic missile tests in the past, including one lately on March 6.
'Washington's hidden agenda'
Press TV spoke to American geopolitical analyst James O'Neill about the political situation in the Koreas.
O'Neill said the deployment of THAAD to South Korea has little to do with North Korea.
He said THAAD is aimed primarily at China.
"I do not expect the Americans would ever actually take [military] action against North Korea. There is no reason for them to do so... North Korea is extremely useful from the American point of view... [Pyongyang] gives them the perfect excuse to... establish the so-called THAAD anti-missile system. It has very little to do with North Korea. It is aimed primarily at the Chinese," O'Neil said.
He said Washington has no plan for peace with North Korea and the White House's true agenda is to perpetuate war in the region.
"If they were serious about having negotiations with North Korea, they would sit down around the table with them and talk. They have refused to do so. They have refused to have the North Koreans visit Washington, they have refused to visit Pyongyang themselves, they have refused to use the Chinese who would be the best conduit [for] discussion with the North Koreans, they have no interest whatsoever in a peaceful settlement of the Korean dispute. It suits their geopolitical purposes very well indeed to maintain the hostility and the rhetoric and of course maintain their forces there."
Get more trending information on Jokpeme News - Europe,US,Middle East,UK,Asia,Africa, Latin America,Entertainment & World News