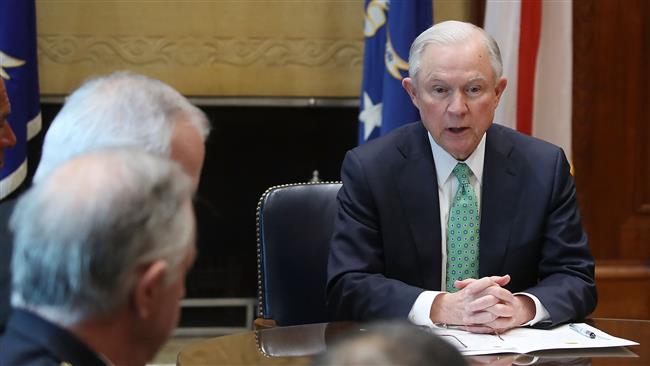 US Attorney General Jeff Sessions meets with Police Chiefs from major cities of the Chiefs of Police Association, at the Justice Department March 16, 2016 in Washington, DC. (Photo by AFP)
The US Justice Department has filed an appeal notice against a ruling by a Maryland federal Judge that partially blocked President Donald Trump’s new travel ban.
The Justice Department filed a notice of appeal with the district court in Greenbelt, Maryland, on Friday, two days after that court and one in Hawaii ruled that Trump’s travel ban discriminates against Muslims.
The department has not published any details about the notice, which is the step before a formal appeal lawsuit.
District judges in Hawaii and Maryland issued separate orders this week, freezing Trump's efforts to close US borders to nationals of Iran, Libya, Somalia, Sudan, Syria and Yemen.
Although the ban was already restrained nationwide by District Judge Derrick Watson of Hawaii on Wednesday evening, the Maryland decision early on Thursday was another blow to Trump's executive order. 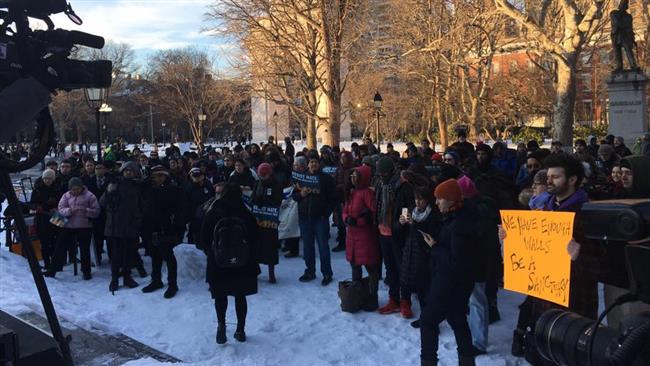 Protesters gather at Washington Square Park in Lower Manhattan in New York City on Thursday on Mar 16, 2017 to express their resentment against President Donald Trump's revised travel ban.
Watson concluded in his ruling that the revised ban is similar to the original one and constitutes religious discrimination.
District Judge Theodore D. Chuang of Maryland said Trump's revised travel order was still meant to discriminate against Muslims.
“The history of public statements continues to provide a convincing case that the purpose of the Second Executive Order remains the realization of the long-envisioned Muslim ban,” he wrote.
The Maryland judge said the ban will cause “irreparable harm” if it goes into effect.
It was another setback for President Trump, who saw his first attempt halted by the federal courts last month.
Trump’s new order maintained a 90-day ban on travel to the US by citizens of Iran, Syria, Libya, Yemen, Somalia and Sudan, but excluded Iraq and applied the restriction only to new visa applicants. It also removed an indefinite ban on Syrian refugees.
Trump on Wednesday called the revised order a “watered-down version” of the first one.
“The order he blocked was a watered-down version of the first order that was also blocked by another judge and should have never been blocked to start with,” he said.
“It should have never been blocked to start with. This new order was tailored to the dictates to the 9th Circuit’s, in my opinion, flawed ruling,” he said.