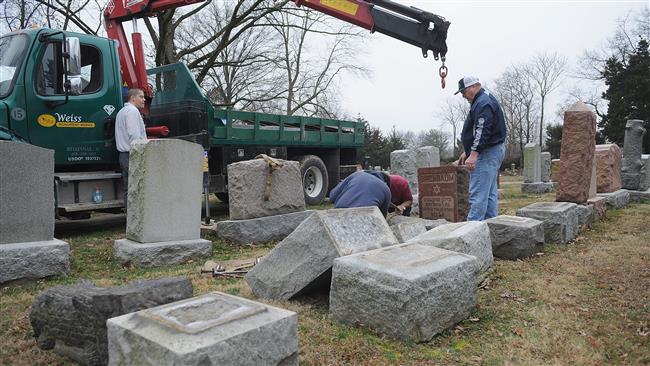 Volunteers from a local monument company help to reset vandalized headstones at Chesed Shel Emeth Cemetery on February 22, 2017 in St. Louis, Missouri. (Photo by AFP)
Police in the US state of Missouri have arrested a man accused of making at least eight Bomb Threats against Jewish centers across the country.
Federal authorities charged the 31-year-old suspect, Juan Thompson, with making the threats against Jewish institutions, including some Jewish community centers, schools and a Jewish History Museum — some in his name and some in the name of a former friend.
The state officials said they do not believe Thompson is responsible for the entire wave of threats that have been recently made against Jewish centers around the country.
Thompson’s alleged threats involved calls, emails and faxes to the Anti-Defamation League’s (ADL) New York City headquarters, the Jewish History Museum, a Jewish school in Farmington Hills in Michigan, and a Jewish community center in San Diego, California.
Jewish community centers and schools in the United States have received five waves of hoax bomb threats since the beginning of this year, which has prompted fears of an increase in anti-Semitism. 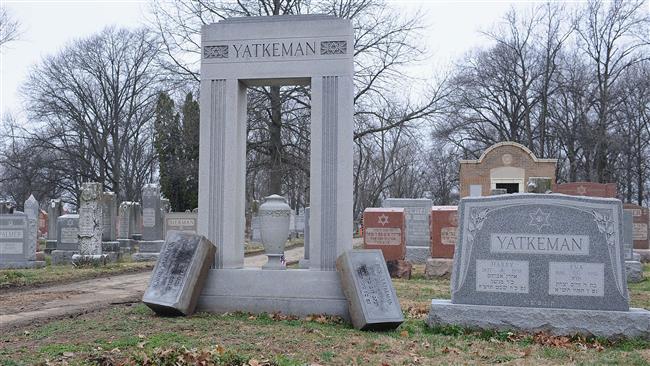 Vandalized headstones are seen toppled over at Chesed Shel Emeth Cemetery in St. Louis, Missouri, on February 22, 2017. (Photo by AFP)
The Friday arrest came following a spate of bomb threats and attacks against Jewish sites across the United States, including the vandalization of hundreds of gravestones at two Jewish cemeteries in Philadelphia, Pennsylvania, and St Louis, Missouri.
In a statement published a day earlier, the Jewish Agency for Israel had expressed “deep concern” over the recent wave of anti-Semitic attacks against Jewish communities in the US.
The agency called the anti-Semitic threats an “ugly phenomena” that “run counter to the foundations of democratic societies in Europe and America."
In his first speech to the US Congress on February 28, President Donald Trump also rebuked the recent anti-Semitic incidents, saying, “We are a country that stands united in condemning hate and evil in all its forms.”