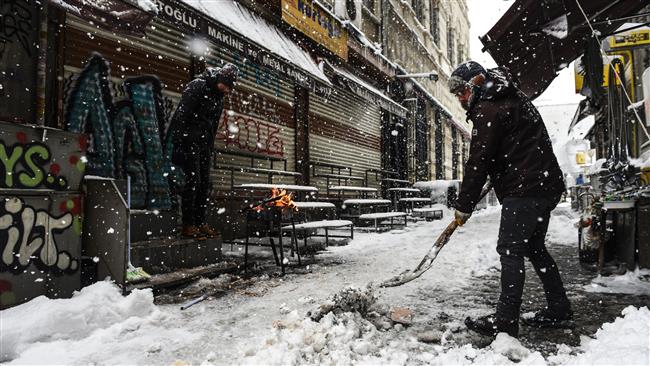 A man removes snow in a street at Karakoy district during snowfall in Istanbul on January 8, 2017. (AFP photo)
Hundreds of flights have been canceled as snowfall continues to grip the city of Istanbul in northwestern Turkey for a second day.
Travel disruption continued in Istanbul on Sunday as flag carrier Turkish Airlines (THY) was forced to cancel over 600 flights, including all domestic routes, until evening.
Workers were busy clearing snow from Istanbul’s Ataturk International Airport while around 5,000 travelers were staying at hotels in the city.
THY officials said some 10,000 other travelers who were unable to reach Istanbul had also been accommodated at hotels.
"We are working to ensure our passengers do not suffer in these difficult conditions," THY chief executive Bilal Eksi said on his Twitter account, adding that the cancellations were mainly due to lack of take-off and landing slots at Ataturk in the snow conditions. The airport, which normally accommodates over 1,500 landings and take-offs each day, had only 172 take-offs and 209 landings scheduled on Sunday.
Weather forecasts said the snowfall may lessen later on Sunday although below freezing temperatures, even unusual for this time of year, were expected throughout the week.
Istanbul’s municipality sent over some 1,300 vehicles and 7,000 personnel into the streets to clear the snow, while metro and tram systems were working round the clock to make up for the disruptions on the roads.
Bosphorus Strait reopened to shipping traffic and urban ferry services as visibility improved and winds lessened throughout Sunday.