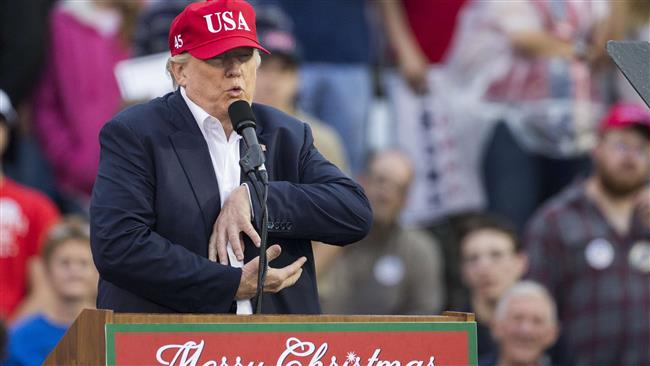 US President-elect Donald Trump speaks during a thank you rally in Ladd-Peebles Stadium on December 17, 2016 in Mobile, Alabama. (Photo by AFP)
US President-elect Donald Trump has condemned the assassination of the Russian Ambassador to Turkey during a visit to an art gallery in the capital Ankara.
The killing of diplomat Andrei Karlov must be "universally condemned," said the future president not in a tweet but a written statement released on Monday, describing the move as "violation of all rules of civilized order."
He also took the chance to use his favorite yet controversial term “radical Islamic” terrorism, over which he was even engaged once in a row with President Barack Obama.
“Today, we offer our condolences to the family and loved ones of Russian Ambassador to Turkey Andrei Karlov, who was assassinated by a radical Islamic terrorist," read the statement. 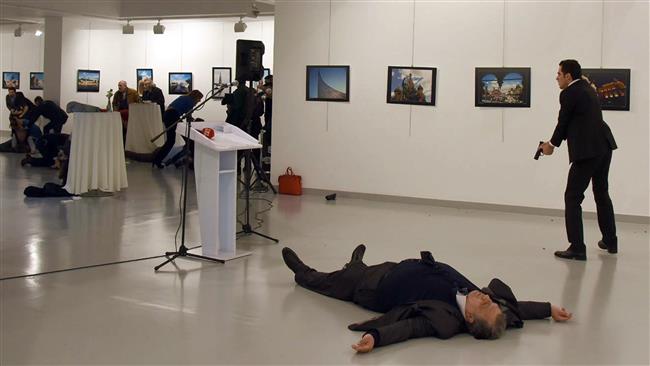 Andrey Karlov (front), the Russian ambassador to Ankara, lies on the floor next to his killer who still points his gun to people attending an art exhibition in Ankara, on December 19, 2016.  (Photo by AFP)
Both Moscow and Ankara hove branded the attack as an “act of terror.”
The assailant was identified as Mevlut Mert Altintas, a 22-year-old Turkish policeman with Ankara's riot police squad.
The clean-shaven man wearing a suit shot the Russian envoy in front of the audience at a photo exhibit and started shouting with a gun pointed at the people.
He was himself shot dead at the scene shortly afterwards.
The president-elect also took to Twitter to comment about other attacks during the day, in Germany and Switzerland.
“Today there were terror attacks in Turkey, Switzerland and Germany - and it is only getting worse. The civilized world must change thinking!”