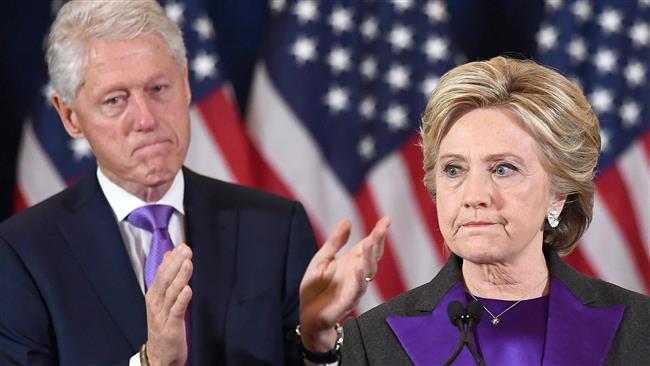 Former US president Bill Clinton looks on as his wife Hillary Clinton makes a concession speech after being defeated by Republican President-elect Donald Trump, New York, November 9, 2016. (Photo by AFP)

I was nervous about switching therapi…
Six Easy Steps to do Facial Steaming …
Vechain Blockchain Technology Powers …
How to Create a Winning Black Friday …
Former US President Bill Clinton says Hillary Clinton “fought through everything” in her failed campaign for the White House, but "couldn't prevail" against the combination of Russian hacking and the FBI’s interference.
Clinton, who was joined by New York Gov. Andrew Cuomo and New York Mayor Bill de Blasio at the state Capitol to cast his ballot as a New York elector, briefly spoke to reporters following the meeting of the state’s Electoral College.
“I’ve never cast a vote I was prouder of,” the former president told reporters outside the statehouse.
Clinton said his wife fought and prevailed through the email scandal that had plagued her campaign from the beginning but could not overcome the Russian hacking and a letter FBI Director James Comey sent to Congress less than two weeks before Election Day.
In the letter, Comey told lawmakers that the bureau had uncovered new material connected to Clinton’s email investigation. The director, however, notified Congress in a letter two days before the election that his recommendation that Clinton should not be prosecuted remained the same.
Despite losing the popular vote by nearly 3 million votes, Republican Donald Trump was officially elected president as members of the Electoral College cast their ballots across the country on Monday.
Electors sealed the president-elect's victory with 304 votes, giving him more than the 270 majority needed to be declared the victor.
Meanwhile, Hillary Clinton's former campaign chairman John Podesta suggested Monday that Trump’s campaign might have worked with Russian hackers to win the Nov. 8 election.
In his first TV interview since Clinton’s loss, Podesta said he did not believe Trump was personally involved in the hacking offensive, but did not rule out the possibility of collusion by his associates.
After weeks of internal bickering, the consensus view within the US intelligence community now is that Russia interfered in the election through cyber attacks not just to destabilize the electoral system but to help get Trump elected.
Get more trending information on Jokpeme News - Europe,US,Middle East,UK,Asia,Africa, Latin America,Entertainment & World News