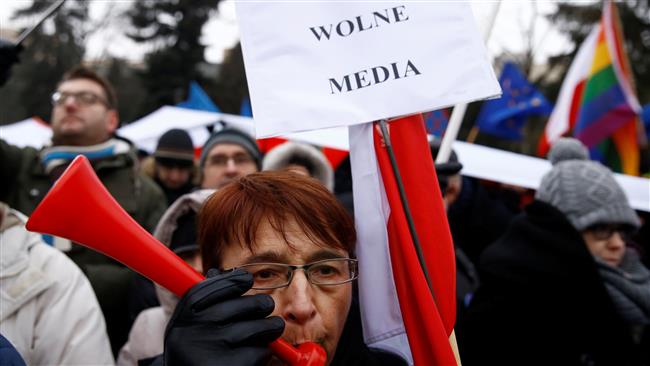 Demonstrators gather outside the parliament building during a protest in Warsaw, Poland, December 17, 2016. The placard reads "Free Media." (Photo by Reuters)
Poland’s lower chamber of Parliament, the Sejm, says it has removed a temporary ban on reporters’ access in response to several days of protests.
The announcement came a day after President Andrzej Duda confirmed that the ruling party had scrapped a controversial bill on restricting journalists’ access to the parliament.
The press office of the Sejm added in its Tuesday's statement that no changes to rules governing journalists’ access would be implemented without first consulting with reporters.
Planned curbs on media access announced by the parliament speaker last week triggered days of demonstrations outside the parliament building.
Also on Tuesday, demonstrators took to the streets in the capital Warsaw for the fifth consecutive day to condemn government plans for restrictions on media coverage. Hundreds of protesters stood outside the parliament waving Polish and European Union flags, denouncing the new rules introduced by the ruling Law and Justice Party, PiS.
Angry demonstrators accused the government of seeking to violate the Polish constitution and democracy.
The announced measures, which were to take effect as of January 2017, would have disallowed the recording of parliamentary sessions. Furthermore, only five television stations chosen by the government and a limited number of journalists would have been granted access.
On Saturday, a number of opposition lawmakers joined thousands of protesters outside the parliament building in Warsaw after a march on the presidential palace. Some of the protesters even prevented the Law and Justice Party politicians from leaving the building. However, police intervened and dispersed the crowd.
The crisis was sparked on Friday when the opposition protested the proposed media restrictions. Some opposition MPs seized the parliament’s main chamber and blocked access to it. 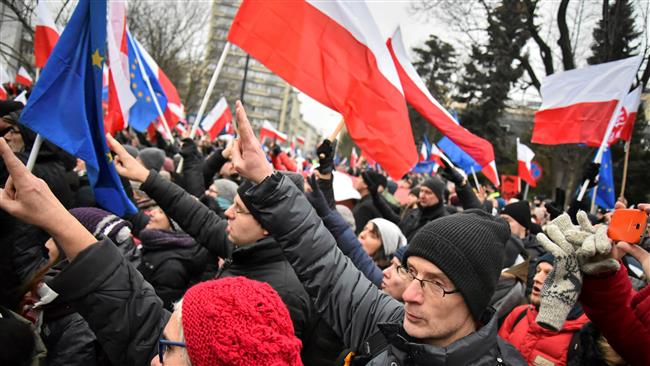 Demonstrators hold Polish and EU flags during the third day of a protest outside the parliament building in Warsaw, Poland December 18, 2016. (Photo by Reuters)
Reacting to the unrest, Prime Minister Beata Shidlo used some harsh words, describing the opposition as “helpless and scandalous.”
"The move by the opposition to ignite extreme political emotions ... has nothing to do with the actual condition of the country," she said.
Poland has been the scene of several anti-government demonstrations in recent months. The ruling Law and Justice Party has been the subject of intense public criticism. Efforts to settle the disagreements between the conservative PiS and the liberal opposition have mostly proven futile.