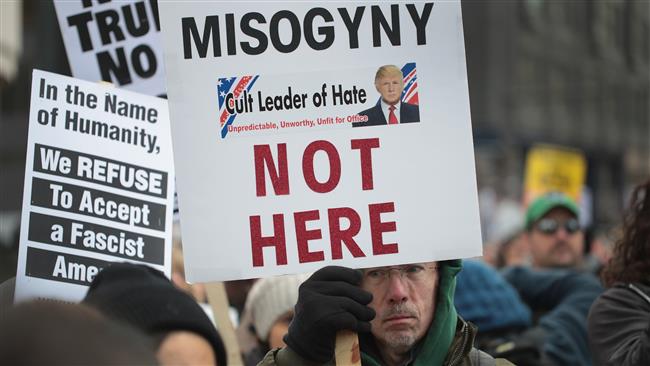 Demonstrators rally near Trump Tower after marching through downtown protesting against President-elect Donald Trump on November 19, 2016 in Chicago, Illinois. (Getty Images)
US Civil Rights groups have urged President-elect Donald Trump to forcefully and publicly condemn racism and bigotry, pointing to nearly 900 racially motivated violent incidents recorded in the 10 days following Trump’s election victory.
The Southern Poverty Law Center (SPLC), a civil rights organization that tracks hate crimes, said Tuesday it had documented 867 “hate incidents” in the 10 days after Trump was elected president on November 8.
More than 300 of the hate incidents included direct references to Trump or his campaign rhetoric, SPLC said.
The incidents — documented in the media or reported through a form on the SPLC website — included vandalism of places of worship, attacks on Muslim women in headscarves and bullying of Hispanic students in schools.
Anti-immigrant hate incidents targeting Hispanics, Asians and Africans made up the largest number of claims, even though many Hispanics and Asians in the US are American citizens who have lived in the country for several generations. Those incidents were followed by anti-black and anti-Semitic incidents.
Civil rights groups say there has also been a spate of hate crimes targeting Muslims.
Richard Cohen, SPLC’s president, said many of those who reported being harassed or attacked said they were shocked because they had never experienced anything similar, leading him and others to conclude that Trump’s divisive campaign has emboldened hate groups and harassers.
“What he hasn’t done is acknowledge that his own words have sparked this barrage of hate that we’re seeing,” Cohen said. “Instead of pretending to be surprised by the pervasive hate that has infected our country, Mr. Trump needs to take responsibility for it and repair the damage that he caused.”
Following the latest SPLC report, the center and other civil rights organizations blasted Trump, accusing him of inspiring acts of violence and harassment and of being too tepid in his condemnation of those behind them.
“This polarized and divisive election has left its mark on all of us, but most tragically on our children,” said Janet Murguia, president of the National Council of La Raza. “We have heard countless stories of harassment, intimidation and bullying of Latino and other students in schools around this country. This cannot stand.”
Trump won the US presidency despite extreme unpopularity among minorities, underscoring deep national divisions that have fuelled incidents of racial and political confrontation across the country.
Large protests have erupted nationwide in response to Trump's election victory following a contentious presidential campaign involving two of the least popular major-party candidates in recent US history.
“He (Trump) scapegoated immigrants, he scapegoated Muslims, he delighted many people by essentially talking very very harshly about women and other groups,” the analyst noted.
He referred to the US president-elect’s tactic to put the blame of hardships on minority communities in the country, adding, “Trump did indeed politicize scapegoating of all kinds of different categories of people.”
Blaming immigrants and other groups for economic and social injustices in the United States is “quite disingenuous,” he said, adding that “it was the corporate globalizers who destroyed the jobs” and standard of living of the American people.
“Someone like Trump, who is trying to essentially get power for himself, has to spin the truth a little bit and rather than directing people’s anger primarily at the banksters and the elite that have driven the United States into the ground in terms of its manufacturing capacity and its working class jobs, instead he scapegoated other categories of people.”
He concluded that there is no future for the working and middle class in the American society and “Trump is an expert that channels people through those anger against these scapegoats and he did very well with that in his running for president and then unfortunately probably continue as president.”
Hate crimes have been reported in all but four US states including Hawaii, Wyoming, North Dakota and South Dakota. Larger states have had a higher number of hate crimes and the states of California, New York and Texas accounted for over a quarter of all the hate crime reports.