Iran: No agreement on Syria ahead of New York talks 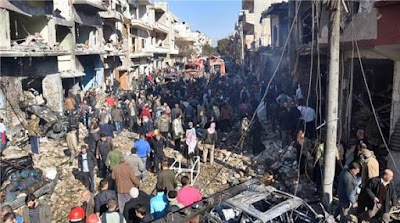 Iranian Foreign Minister Mohammad Javad Zarif has said hours before a conference on Syria takes place in New York that there is still no agreement on which groups should comprise the "opposition" and which groups should be on a list of "terror" organisations.
Foreign ministers from more than a dozen countries - including Russia, the United States, Turkey, Saudi Arabia, Iran and other European and Middle Eastern powers - are set to discuss ending Syria's civil war in New York on Friday.
While there is agreement to end the war, there are a number of sticking points that are expected to prevent a breakthrough, including the fate of Syrian President Bashar al-Assad.
"There has been no agreement on two important aspects; one is the opposition groups and the composition of the opposition groups and second is the list of terrorist organisations," Zarif told Al Jazeera's Diplomatic Editor James Bays on Thursday evening.

"I believe the opposition should be serious and inclusive so that they can engage in serious talks. We suggested a national unity government a long time ago and we hope that this can in fact become a serious exercise, including various opposition groups, not just one inclination within the opposition.
"At the same time we should exclude people with official affiliation with Daesh (the Islamic State of Iraq and the Levant), al-Nusra Front, Ahrar al-Sham, or other al-Qaeda affiliates."
US and Russia to lead talks
The US and Russia are heading the talks on Friday. Countering the Islamic State of Iraq and the Levant (ISIL) will be one of the major issues on the agenda.
US Secretary of State John Kerry and Russian President Vladimir Putin agreed in Moscow this week to continue what they called a final stage on listing terrorist organisations and on providing assistance to the UN in forming the opposition delegation which should be representative and ready for negotiations with the Syrian government.
Syria's main opposition group, the Syrian National Coalition, will not attend the talks.

Iran: No agreement on Syria ahead of New York talks