Tough talking at the EU–China summit

On 22 June, the first summit took place between the new EU leadership team, headed by European Commission President Ursula von der Leyen and President of the European Council Charles Michel, and China’s President Xi Jinping and Premier Li Keqiang, but there was little time for small talk. One official remarked, ‘the gloves were off from the start’ with no attempt to secure a traditional joint statement, let alone a joint press conference. 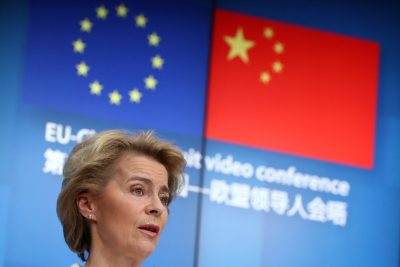 The EU side accepted that EU–China relations ‘were crucial in many areas’ but at the same time stated that ‘we have to recognise that we do not share the same values, political systems, or approach to multilateralism’. The Chinese side appeared surprised at these blunt words but they stemmed from the March 2019 EU policy document which stated that China was a ‘systemic rival’ in certain areas.

The summit was originally scheduled to take place in March in Beijing as a prelude to the Leipzig summit involving President Xi and all 27 EU leaders in September, during the German presidency of the European Union. German Chancellor Angela Merkel hoped that Leipzig would mark the signature of the long-running negotiations on an EU–China bilateral investment agreement, but it has also been postponed due to COVID-19. Whether the investment agreement will be finalised this year is now an open question. COVID-19 is not helping the negotiation process, although some progress has been made by video conference. Most recently, European Commission Vice President Valdis Dombrovskis said that negotiations with Beijing are entering a ‘critical phase’ and expects China to present new proposals at a high-level economic and trade dialogue in July.

Frustration at China’s foot-dragging is a major factor in the European Union’s change in tone. Von der Leyen told Premier Li that European companies were getting a raw deal in China while Chinese firms enjoyed extensive access to the European Single Market. If China fails to accept reciprocity, rein in industrial subsidies and end the practice of forced technology transfer, then economic barriers will go up.

The European Commission is presenting new proposals to tackle unfair subsidies and block predatory takeovers of European companies by third countries. The European Union also stressed the importance of digital freedom and privacy. 5G mobile technology suppliers would have to respect very clear rules. A senior German official remarked after the summit that if China doesn’t ‘get the message now, they never will. Surely they don’t want to open a fight with the European Union as well as the United States’?

Apart from the slow progress on the trade talks, von der Leyen and Michel made clear that the European Union is irritated by China’s COVID-19 disinformation and propaganda efforts, cyber-attacks, the treatment of ethnic minorities and the proposed imposition of a national security law on Hong Kong. The new law is seen as a matter of ‘grave concern’ and does not conform to China’s international commitments. The proposed measures ‘weakened trust in China’. But the European Union stopped short of threatening specific action as any sanctions against China would be difficult to agree upon within the bloc.

But there were some positive notes. There was agreement on the need to cooperate on global efforts to stop the spread of COVID-19, share test results and vaccines. Both sides should work together on a global recovery plan and help developing countries, especially through debt relief. The European Union also called on China to fully participate in the independent World Health Organization review of lessons learned from the pandemic.

Cooperation in regional security — including on Iran, Afghanistan and the Korean Peninsula — was praised and there was agreement to work together on the global economic recovery based on sustainable development. China needs to improve energy efficiency, reduce its dependence on coal and step up to the plate on climate change commitments. It should set a goal for climate neutrality at the earliest possible date. The European Union also expressed concern at China’s deteriorating human rights situation, evoking the high-profile cases of Gui Minhai, Michael Kovrig and Michael Spavor.

The Chinese side offered no concessions. There was no press conference on their side but the official post-summit commentary emphasised areas of cooperation rather than confrontation. China’s Xinhua News Agency quoted Xi as saying that ‘since the COVID-19 outbreak, China and the European Union have supported and helped each other. The two sides [are] partners not rivals. Cooperation far outweighs competition, and consensus far outweighs disagreement’.

The next six months will be critical in shaping this relationship. Merkel wants to crown her term in office with the investment agreement finalised — but not at any price. Meanwhile, China surely does not want to see Europe slip into a potential US-led camp alongside India, Japan, Australia, Canada and others. Beijing has been able to play divide and rule in Europe for some time, establishing the ‘17+1’ cooperation framework with Central and Eastern European countries. But most EU countries realise they have gained very little from this exercise and from promises of investment by supporting China’s Belt and Road Initiative.

There is a new sense of unity and purpose in the European Union regarding China, with fewer illusions and a greater sense of realism. This is leading the European Union to take decisive steps to defend its economic interests and to call out China on a range of issues including human rights and Hong Kong. The key to an improvement in the relationship will require a change in China’s policies. But for that we might have a long wait.

Fraser Cameron is Director of the EU-Asia Centre, Brussels.

Tough talking at the EU–China summit