The Thai Military used the 24 March 2019 election to embed itself even more deeply in governance. Though there is now a functioning parliament, the democratisation achieved after 1992 has been wound back, lending credence to the judgement that the 2014 coup was a coup of the army, by the army, for the army.

Wuhan Weather Report
I was nervous about switching therapi…
The Neighborhood Bar that Grew Three …
A Comparison of the Environmental Imp…
Relapse Isn’t Part of Recovery. It’s … 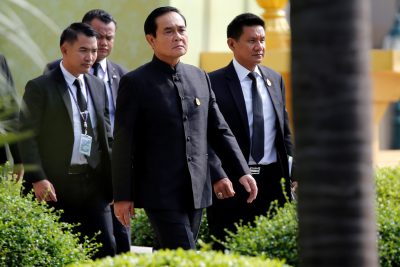 Contrary to predictions that a Military Proxy Party would fail like its predecessors, Phalang Pracharat proved to be competitive, gaining the most votes of any single party. On top of advantages such as a ban on political parties during the junta’s rule, Phalang Pracharat benefitted from an electorate tired of coloured-shirt instability. It also gained when one of the proxy parties of exiled former prime minister Thaksin Shinawatra nominated Princess Ubolratana as a candidate. This was a massive miscalculation. After the monarchy’s intervention, the party was dissolved, costing the Thaksinite parties as many as 100 seats.

As the core of a shaky coalition in the 500-seat lower house, Phalang Pracharat facilitated the continuance of coup leader General Prayut Chan-o-cha’s prime ministership. Serving and retired military officers occupy almost half the 250-member appointed Senate. Parliamentary seats have been just one lucrative perk for ‘khaki capital’. Since the coup, military officers have made up nearly 20 per cent of all board memberships. In 2017, they sat on the boards of 43 of 57 state-owned enterprises. The top echelons of the military and their spouses own assets far in excess of what their salaries could acquire, as demonstrated in their own statements to the National Anti-Corruption Commission (NACC). Meanwhile, the military’s Internal Security Operations Command has become increasingly entwined with the country’s administration at national and provincial levels, acting as a political tool for Bangkok.

The weakness of the NACC in pursuing unexplained military wealth is mirrored by the partiality of Thailand’s other supposedly independent institutions, including the Election Commission and the courts.

Thailand’s courts continue to be arenas of political contestation and are inclined to rule in the interests of power. In May, the Constitutional Court dissolved the Thai Raksa Chart party for nominating the Princess. In November, it stripped Future Forward Party leader Thanathorn Juangroongruangkit of his parliamentary seat, judging him to have held shares in a media company while campaigning. The judgment was literal in the extreme, given the media company had not published its lifestyle and inflight magazines for two years prior to the election. Now the party is under threat of dissolution for another of the 28 charges facing Thanathorn and his party, leading to valid comparisons with Cambodian Prime Minister Hun Sen’s use of ‘lawfare’ to hobble oppositions.

Meanwhile, despite the 2017 Constitution forbidding convicted criminals from serving as ministers, convicted heroin trafficker Thammanat Prompao has remained in office as assistant agriculture minister. Similarly, the judicial process is moving glacially for Palang Pracharat MP for Ratchaburi province, Ms Pareena Kraikupt, who appears to have treated public land as her private property, an offence that others have served prison time for.

Despite the judiciary playing whack-a-mole against reformists, Thailand’s election and parliament have opened up some political space after the five years of junta rule. The possibility of a generational shift in attitudes among Thai youth, marking a decline in respect towards the monarchy and military, is currently alarming conservatives, prompting accusations around the influence of ‘fake news’ and ‘brain-washing’.

Parliament is also exposing vulnerabilities in Prayut’s hold on power. He has struggled to pass his government’s budget.  In November, the opposition parties succeeded in passing a motion inquiring into the lasting impacts of Article 44 of the interim Constitution, the ‘edict’ power used by General Prayut as junta leader. The motion passed after Democrat members of the coalition defected, though it was later overturned. The opposition was also bold enough to throw a spotlight on the most sensitive issue in the Thai political system, when it raised questions about the transfer of the two King’s Guard regiments from the army to the direct control of King Vajiralongkorn.

The partnership between the military and the monarchy has been a crucial dynamic in Thai politics since 1957, but it is never static. Under the current monarch, the relationship is entering a new phase in which the King’s own professional background as a soldier is coming to the fore. This monarch knows the military intimately and needs no intermediaries, unlike his father Bhumibol. This is not necessarily a comfortable period for the military, as new training regimes and standards of appearance are introduced at the monarch’s behest, and as he builds his own private force, the Royal Security Command. How this relationship manifests in future years will be pivotal to Thailand’s political future.

In 2020, Thailand’s sagging economy will pose the most significant challenge to the Prayuth government. The US–China trade war and the strong baht have reduced Thailand’s exports. There is the potential for some US industry to relocate to Thailand as decoupling proceeds, but this is years away. In the meantime, the government is persisting with its Eastern Economic Corridor plan, prioritising it ahead of China’s preferred project, the Kunming–Bangkok high speed rail project. All in all, the military proxy party will likely confront numerous obstacles in 2020. Its slim parliamentary majority means survival is uncertain.

Gregory V Raymond is a Lecturer in the Strategic and Defence Studies Centre, The Australian National University, and author of ‘Thai Military Power: A Culture of Strategic Accommodation’ (NIAS, 2018).

This article is part of an EAF special feature series on 2019 in review and the year ahead.