The management of Australia’s engagement with China is the most important issue in Australian foreign relations.

In 2016, Australia’s bilateral trade with China in goods and services topped AU$155 billion (US$122 billion), growing three times faster than world trade as a whole. China was Australia’s largest export market and largest source of imports. It was also the largest source of foreign investment for the third consecutive year. 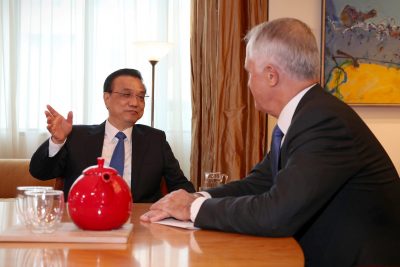 If things go badly wrong in the Australian–Chinese trade relationship, the consequences will be painful. Australia has no immediate alternative markets for its products or sources of investment to fill the gap.

In a security sense, the scale and nature of China’s activities are transforming the international order. From North Korea’s nuclear program to climate change, it is hard to think of a major international issue that does not involve China in some way. China is also an important player in every major international institution in which Australia wants to influence outcomes, from the UN to the ASEAN Regional Forum.

President Xi Jinping’s moves to reinforce Communist Party control in China have forcefully highlighted the clear systemic differences in the way the Chinese Party-state operates. Now, led by the most ambitious Chinese leader in decades, China sees itself as a great power.

Australia can and should form views about what China’s strategic ambitions might ultimately be and how successfully it will manage its domestic problems. It should try to nudge developments towards the outcomes it prefers. But China’s future international behaviour and its domestic outlook are intrinsically unknowable. So how should Australia approach and conduct its bilateral relations with China?

While Australia has never had to manage a relationship of this complexity before, the remarkably consistent positions of recent governments is a solid place to begin. The core of the policy response from both major parties, repeated most recently in the Turnbull government’s Foreign Policy White Paper, has been to acknowledge that China’s rise is both legitimate and welcome but to also note that the world into which China rises needs to be one in which agreed rules are kept, all voices are heard and China acts responsibly.

More contestable has been the assertion that Australia does not have to choose between its strategic alignment with the United States and its economic ties with China. This is true only in the sense that Australia is unlikely ever to be confronted with an ultimatum asking it to choose between preserving its trade with China and formally abrogating the ANZUS treaty. In reality, Australia is choosing every day, whether it be to sign on to the Belt and Road Initiative or to conduct freedom of navigation patrols in the South China Sea. These choices will sharpen as the stresses in the relationship between Washington and Beijing increase.

In the current Australian national security debate, it sometimes feels as though China is becoming a proxy for the United States. Because of the difficulty of talking frankly about the United States under an administration whose policies veer wildly and whose values are uncertain, a posture of resolute opposition to China is seen as a measure of loyalty to the alliance.

That is the wrong way to deal with both China and the United States.

To make effective choices in all these areas, Australia is going to need much better insight into the thoughts of Chinese policymakers and the processes of Chinese policymaking. Australia will need to understand China as well as it does the United States — not because it will always agree with China but because it will have more chance of shaping China’s behaviour if it is engaged and knowledgeable. The investment of time and education this will require from Australia’s political leaders, officials and business people is enormous. Australia is seriously under-prepared for this.

This is where foreign policy comes in. The role of foreign policy is precisely to manage differences. The world into which Australia is moving — one that is more nationalist, more protectionist and more nativist — is one in which the functions and traditions of foreign policy (which have been marginalised in recent decades) will be increasingly relevant.

Within the broader scope of statecraft, the work of foreign policy is to expand the space in the international system within which Australia can operate and to make sure that at critical points it has choices. That involves diversifying Australia’s markets and partners.

To successfully conduct its bilateral relationship with China, Australia will need to consider issues through a comprehensive prism that balances, weighs and incorporates the different parts of the relationship. Australia needs deep engagement, discipline, patient trust building, balanced reciprocity — bearing in mind both countries’ different systems and interests — and an insistence on non-interference in its domestic political processes.

On that, however, Australia must recognise that the best response to any threats to the integrity of its political system or to the inclusiveness of its society — from China or elsewhere — lies overwhelmingly in the strength of its own institutions and its determination to defend them.

With China, what works best is consistency of message delivered clearly in an atmosphere of mutual respect. To state this objective is not hard. But its effective execution will be one of the most difficult and consequential things Australia has had to do as a country.

Allan Gyngell is Adjunct Professor of Public Policy, The Australian National University and former Director-General of the Office of National Assessments.

A longer version of this article appeared in the most recent edition of East Asia Forum Quarterly, ‘China’s Influence’.