With a Trump presidency and China’s assertiveness adding to regional uncertainty, Australia along with its neighbours would be wise to look at new ways to sweeten regional ties, while mindful of the past. 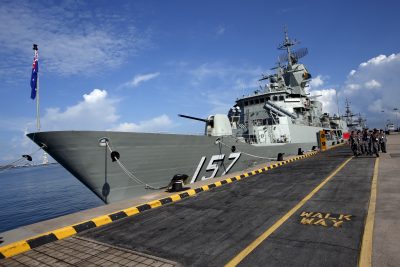 A MANIS (Malaysia, Australia, New Zealand, Indonesia and Singapore) sub-regional multilateral cooperation forum is even more pressing at this time of heightened doubts about the United States’ potentially irresolute approach to structural security challenges in the Asia Pacific.

For nearly fifty years, Australia and New Zealand have partnered with Malaysia and Singapore as well as the United Kingdom in the Five Power Defence Arrangements (FPDA). On one level, the FPDA is an anachronism — a hangover from the sunset of the British Empire. Yet the participating nations have found it to have enduring utility. It facilitates multilateral regional military engagement and cross-pollination of ideas, practices and experiences in a non-threatening way. At times when bilateral ties have strained, FPDA collaboration has proceeded largely unhindered by surrounding political storms.

Today economic ties have never been stronger and security ties remain robust as well: Australian military ships and aircraft routinely operate in and through Malaysian and Singaporean air and seaports. Australian maritime surveillance flights across the South China Sea routinely include Malaysian military personnel. The Integrated Area Defence System, based in Malaysia with an Australian senior officer in charge, plays an important role in facilitating close but largely unheralded engagement between these longstanding security partners.

Australia signed a comprehensive strategic partnership agreement with Singapore in 2015, bringing bilateral economic, security and people-to-people ties virtually to the level of ties with New Zealand. That agreement built on the ties established over three quarters of a century.

Clearly, Australia’s ties with Malaysia, Singapore and New Zealand are strong, multifaceted and overwhelmingly positive. Yet this is simply not the case with Australia’s most important neighbour, Indonesia.

Despite having been first to recognise Indonesian independence after World War II, the bilateral relationship has been buffeted repeatedly. In the 1960s this revolved around the fate of the Dutch colony of New Guinea and Indonesia’s ‘Confrontation’ over the newly-emerged Malaysian confederation. The nadir came in 1999 when Australia supported an independent East Timor. Having supported Indonesia’s takeover in 1975, the Australian volte-face is still seen as an act of treachery.

There was a silver lining to the tragedy of the Jakarta and Bali bombings and the Indian Ocean Tsunami in the early to mid-2000s: Australia was able to offer a hand of friendship to Indonesia, providing invaluable humanitarian and other support as Indonesia struggled to respond. That support led to the signing of the Lombok Treaty in 2006 — itself largely predicated on Australian agreement to recognise the former Netherlands New Guinea (now Papua) as being Indonesian territory in perpetuity.

Since then, unfortunately, the bilateral relationship has been like a game of snakes and ladders, with moments of apparent closeness followed suddenly by strained ties. Controversy over beef, boats, spies, clemency and Papua have continued to unsettle relations.

Yet, like Malaysia and Singapore, getting the ties right with Indonesia is far too important to be subject to such sour notes.

Jokowi has recognised Indonesia’s need to engage internationally and has described Indonesia as the ‘maritime fulcrum’ of the Asia Pacific. Without question, geo-strategically and economically, Indonesian prosperity and stability is vital for the region. But many of the challenges faced by Indonesia require engagement with its neighbours. Jokowi seems to understand that — hence his recent visit to Australia.

Indonesia would never want to join the FPDA, which was established as an imperial legacy and is mindful of concerns over Indonesia’s future intentions. Similarly, being non-aligned and rightly proud of its independence, Indonesia has studiously avoided alliances. And the FPDA dynamics serve a distinct purpose which no participant wants to unsettle.

So an FPDA-like alliance is out of the question, but a maritime cooperation forum might just be sufficiently low key to work. With some vision and determination, the five MANIS countries could work together on a broad range of issues of common concern related to the maritime space they share, unhindered by the apparent stasis associated with other broader regional forums.

Such a forum would benefit from the work undertaken under the FPDA and Lombok Treaty provisions but would likely need to operate quite separately from them.

It could be used to address a range of shared concerns, drawing in expertise from participating ministries of foreign affairs, defence, border protection, police forces and environmental authorities as well as universities and think tanks. A lead agency should pilot the concept. The Australian National University, working in consultation with the Australian Department of Defence, could co-host consultations with Indonesian counterparts to facilitate the initial round of talks to set the terms for the forum.

As part of the forum, ‘track 1.5’ working groups could examine opportunities for collaboration on transnational crime, illegal fisheries, environmental and natural resources challenges and terrorism. Once the MANIS forum concept is established, deeper engagement by the MANIS governments and respective institutions should be explored.

Naysayers may argue that Australia is already committed to too many ASEAN-related regional forums. Australia’s engagement in such forums remains important, for although progress can sometimes seem glacial, they cover a wide range of issues of concern in which Australia has an interest.

But perhaps it is worth the extra effort to help form a MANIS forum. It might just manage to make greater progress on some of the issues that have stalled or have been interminably delayed elsewhere.

John Blaxland is Professor of International Security and Intelligence Studies at the Strategic and Defence Studies Centre, The Australian National University.

This post first appeared on East Asia Forum, please read the originial post: here
People also like
Top Back-To-School Preparation Tips & Activities
Playing the Casino and Chances of Winning
Why Furries Make Excellent Hackers
Giant Piece of Space Junk Expected to Crash into Earth this Weekend
How to Avoid Forex Scams
Office Life – Preview – 2
Self Motivation: How to Keep Moving Forward In Your Career or Business
When Personal Ethics and Work Assignments Conflict