There is growing evidence that Chinese civilian security forces have conducted joint operations with Afghan and Tajik forces in the Wakhan Corridor, well inside Afghan territory.

Experience Unforgettable Pleasure: Di…
Why SEO Is The Next Big Thing in the …
Common Problems with Slit Lamp and Re…
Creating and Selling Digital Products
Telegram Marketing solutions

A spokesperson for the Chinese Ministry of Defence has denied any People’s Liberation Army (PLA) involvement in Afghanistan. But he did not refute that Chinese civilian security services operated in Afghanistan, saying that ‘the law enforcement authorities of the two sides have conducted joint law enforcement operations in border areas to fight against terrorism’. 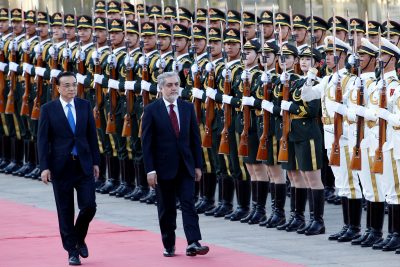 This vague wording doesn’t define ‘border areas’ and there is no description of operational details. The difficulty of the terrain — the closed border is over 5000 metres above sea level in many parts with no road access and is snowed in for up to 8 months a year — dictates that operations would likely occur some distance from the actual border.

Available evidence suggests that this is the case.

First, a British traveller came into contact with Chinese, Tajik and Afghan security services at a military checkpoint in the Wakhan Corridor, according to his October 2016 travel blog.

Second, an article from an Indian outlet published photos in December 2016 of what it claimed were Chinese defence companies’ vehicles operating in Afghanistan. The vehicles in the photos look similar to a Chinese-produced ‘Mine-Resistant Ambush Protected’ (MRAP) vehicle, and the Humvee-style Mengshi 4×4. These vehicles are available for export so it is possible they do not belong to the Chinese Security Services, although Afghan forces are largely stocked with American vehicles.

Third, the same article claims that unidentified sources ‘inside the region say the PLA enter Little Pamir twice a month through Tajikistan. The troops reportedly stay in a local school in Bozai Gumbaz and are barred from speaking to local Afghan citizens’. Such a specific location for Chinese personnel accommodation does lend credence to these claims.

Fourth, an unnamed Chinese official in Kabul confirmed on numerous occasions the existence of joint Afghan–Chinese–Tajik trilateral security operations to a journalist based in the city.

All this credibly suggests that Chinese security forces have operated inside Afghanistan. These sources use the terms the ‘Chinese military’ and the ‘PLA’. But casual observers often struggle to distinguish between the rather similar uniforms of the Chinese military, the paramilitary People’s Armed Police and the Ministry of Public Security (MPS).

My judgement is that the MPS is the most likely organisation. The Chinese government has said that its law enforcement agencies have been involved in joint operations and the PLA have not. And during Afghanistan President Ashraf Ghani’s 2014 visit to Beijing the two countries announced they would undertake joint law enforcement operations.

Domestically the MPS plays a leading role in counterterrorism and border protection. The MPS widely uses the Mengshi 4×4 and MRAPs seen in the photos, particularly in Xinjiang. Joint policing operations are also an easier diplomatic sell than military involvement. And the MPS (unlike the PLA) has recent experience undertaking bilateral and multilateral operations in neighbouring countries. Since December 2011, China, Laos, Myanmar and Thailand have completed dozens of joint police patrols on the Mekong river, aiming to crack down on crime in the region. In Central Asia, the MPS has conducted joint border patrols and other enforcement activities with Kyrgyzstan, Kazakhstan and Tajikistan.

This leaves the question of why China is doing this in Afghanistan. And why now?

Beijing has a broad interest in Afghan stability. The Turkistan Islamic Party, a separatist organisation that Beijing has linked to terror attacks in Xinjiang, is believed to be active in Afghanistan. Instability in Afghanistan could also derail Belt and Road Initiative activities in neighbouring Pakistan and Central Asia.

The US withdrawal from Afghanistan focused China’s efforts on the broad issue of Afghan stability. Military aid has increased from a low base and intelligence sharing tightened. In 2016, China, Pakistan, Afghanistan and Tajikistan launched a quadrilateral cooperation and coordination mechanism for counter-terrorism.

But China’s security operations in the Wakhan Corridor would appear to be narrowly focused on shoring up the Afghan area closest to Xinjiang. The area is largely free from the Taliban and violence. China would likely prefer it to remain that way.

China’s appearance at military checkpoints might suggest monitoring of people flows. Individuals have previously been caught trying to leave China via the Corridor despite the difficult terrain. Intelligence gathering, trust building and capability enhancement are also possible benefits of the operations as well.

It also seems unlikely that Chinese security services would seek to directly fight the Taliban. China maintains that a political solution is the only feasible route to peace, and Beijing has tried to play an active hand in facilitating dialogue between the Taliban and the Afghan government.

US troubles have clearly demonstrated to China the risks of getting involved in Afghanistan. But for now the information available suggests Beijing has decided that security operations in Afghanistan, most likely within civilian limits and not too far from the Chinese border, is the least worst policy option.

Dirk van der Kley is a PhD candidate at the Centre for Arab and Islamic Studies, The Australian National University and a Visiting Fellow at the Shanghai Academy of Social Sciences. You can follow him on Twitter at @dvanderkley.