The Obama administration’s rebalance to Asia has sought to energise US partnerships in the region, stabilise relations with an increasingly assertive China and embed the United States in the economic prosperity of the region. But as Obama’s time in office comes to an end, the rebalance has been found wanting. And his successor’s efforts will be gravely hampered by the challenges revealed during the 2016 presidential election. 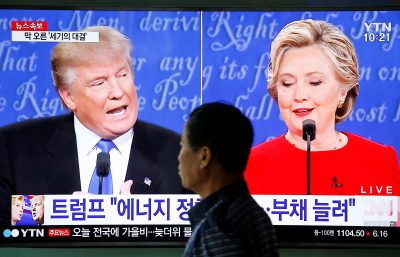 Some of the challenges stem from the political complexities within Asian nations. Allies in the region like Philippines President Rodrigo Duterte seem to have momentarily jumped ship. Others, such as Australian Prime Minister Malcolm Turnbull, have simply become more cautious.

China’s influence is growing, and Beijing has become far less interested in compromise on some of the more difficult issues in the Sino–US relationship, most obviously maritime disputes with its neighbours and human rights.

But it is the United States’ own commitment to the region that seems the most fragile.

Both Hillary Clinton and Donald Trump have come out strongly against the Trans-Pacific Partnership (TPP), signalling a precarious future for the 12-nation trade pact that was to crown the Obama rebalance to Asia.

Beyond the TPP, Trump shocked the region by arguing that US alliances in Asia, like those with the North Atlantic Treaty Organization, no longer serve US interests. Japan and South Korea, he argued, should be left to fend for themselves against a nuclear North Korea. Trump views these longstanding security arrangements not as part of a broader strategy, but as a transaction to be renegotiated at Washington’s whim.

Clinton has been and continues to be a strong supporter of US alliances. She was there at the creation, so to speak, of the Obama rebalance to Asia. Yet while her election may reassure allies that a break is not imminent, a Clinton presidency will need to contend with the damage caused by the threat of alliance abandonment.

Trump’s characterisation of US interests may be inordinately parochial and his calculus of cost-benefit crude, but these questions about free trade and alliances are not completely new in US politics. There has always been a clamouring for greater market access abroad and anger at the manufacturing jobs that have been taken from Americans and given to overseas workers.

The call for greater allied burden-sharing too has ebbed and flowed. Frustrations emerged first with the United States’ recovered European allies in the 1960s, and again in the 1980s when Japan became the world’s first ‘economic superpower’. Now Trump wants to resurrect that call for renegotiating alliance equities.

His claims come at a time of increasing pressure on the United States to demonstrate its resolve as China, Russia and an ever more pugnacious North Korea put pressure on US allies and their neighbours. US allies today are concerned about Beijing’s intrusions into their airspace and waters, and are looking to Washington to lead in defending freedom of navigation and peaceful commerce in the region. And for those that confront China’s growing use of military force in assertive maritime claims in the East and South China Seas, their ability to defend their nations depends heavily on a strong and sustained US military presence in Asia.

Washington will need to bolster — not reduce — its forces in the region, and provide steady leadership over the collective effort to police Asian waters. Leaders in Tokyo, Seoul, Canberra and Manila must also respond to their publics, and persuade them that collective action is the best remedy to maintaining the norms that have governed the peaceful use of Asia’s maritime commons. Moreover, if the Korean peninsula becomes embroiled in a conflict, UN forces led by the United States are committed through the Korean War Armistice Agreement to maintain the peace.

Taxing US allies for the use of US forces would destroy the United States’ close network of partnerships in Asia, the very strategic assets that successive US administrations have laboured to build over the last half century. It would erode the global commitment to the UN and to collective security.

Future US–Asia policy challenges will all require partners. The next president will be tasked with containing Pyongyang’s ambition to create a viable nuclear force, and they must build a coalition of strategic partners to ensure the maritime security of the Asia Pacific, especially in Southeast Asia where maritime capacities are weak. Assisting in creating barriers to cyber-intrusions, advocating for and assisting in the peaceful transition to democracy for the people of the Asia Pacific, and building an open and free trade regime through the TPP are all on the agenda.

And finally, perhaps most difficult of all, they must attempt to persuade the Chinese people that their future prosperity and security will depend upon a shared set of rules and norms for all of the people of the Asia Pacific.

Ironically it is the American people that perhaps need to be persuaded the most.

American identity debates have long had an isolationist thread. But for US allies and partners in Asia, the Trump variant sounds like heresy. And for many here in the United States, his prescriptions for US policy sound downright dangerous.

The security of the United States’ Asian allies depends on a steady America. While their impulse may be to retreat in the face of this new American conversation about its interests and values, a wiser course may be to take on yet again the mantle of advocacy. After the election, US regional allies may need to remind the United States of what is at stake if the United States loses its way in Asia.

Sheila A. Smith is senior fellow for Japan studies at the Council on Foreign Relations.