Now Birds Are Dropping Dead from the Sky: Apocalyptical Enough? 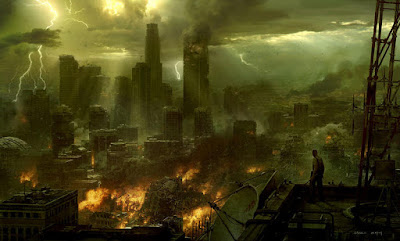 Birds are dropping dead in alarming numbers in New Mexico completing the apocalyptical picture of what America looks like today.

Wildlife experts are reporting potentially hundreds of thousands of birds have already died. Some speculate that a recent cold front that hit the state last week may be the cause.

Others are suggesting the deaths could be related to the West Coast wildfires causing damage to the bird's lungs.
In Other News
There's dueling natural disasters facing the nation. Out-of-control wildfires along the entire West Coast and a super soaker event unfolding along the Gulf Coast.

Hurricane Sally made landfall this morning. Catastrophic flooding is unfolding in Alabama and Florida.

What's making this super soaker event especially dangerous is that Hurricane Sally is a slow-mover that will hover over large swaths of land, potentially flooding cities and rural areas.

On the other side of the country the entire West Coast is on fire. In California alone over 3.2 million acres of land have been scorched. Smoke from the raging fires has reached Europe.

Here in Oregon, we've experienced over a million burned acres, and in Washington more acres were burned in the state in a single day than were charred in the past 12 seasons.

Thirty-Six deaths have been attributed to the West Coast conflagration with dozens of missing people being sought by their families. Twenty-two missing people in rural Oregon are surrounded by fires, and it's too dangerous for searchers to help them.
In what could have been an inspiring moment of unity Trump went to California to see the destruction the fires have inflicted on the state. While there, he made it clear that he doesn't believe in climate warming and that the scientists don't know what they're talking about.

Quote for the Day: "I have heard the language of apocalypse, and now I shall embrace the silence." -Neil Gaiman

Now Birds Are Dropping Dead from the Sky: Apocalyptical Enough?