Pandemic Diary Day 147: Why Kodak is not Manufacturing Drugs After Trump Touted the Company 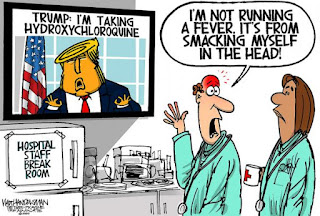 Revelations of everyday corruption during the Trump regime are so common they get little media attention these days.

Trying to survive during a never-ending pandemic is the primary news. With Trump handicapping progress on battling the coronavirus by displaying zero leadership... government corruption is playing second fiddle to breaking news.

It wasn't that long ago Trump made a big Deal about saving a great American company like Kodak from going bankrupt. He bragged that by re-tooling Kodak to manufacture drugs, America would be less dependent on foreign pharmaceutical companies. That was then.

This is now: The Wall Street Journal reported that the SEC was investigating Kodak stock purchases by company board members and stock options granted to them before Trump announced the deal on July 28th.

Sen. Elizabeth Warren called for the SEC investigation into potential insider trading concerning options the day before Trump waddled out and announced a bigly deal with Kodak.

Warren warned the SEC that "substantial amounts of company stock" by Kodak CEO James Continenza and another board member, were purchased prior to the deal "...at a time when Kodak and Trump were negotiating the deal in secret."

The irony to me is that the development bank loan Kodak was going to receive was the first of its kind under the Defense Production Act in collaboration with the U.S. Department of Defense.

One big element of this dark arrangement really stands out starkly... one of the main drugs Kodak was supposed to be producing was hydroxychloroquine. Trump and full-time douche bag Peter Navarro's preferred drug to treat COVID-19. There's no such thing as coincidences with Don the Con's backroom deals.

Kodak's chance for revival by re-tooling and making drugs with a new industry loan is circling the drain in the halls of justice. It looks like Kodak's lobbying efforts, after spending a company record of $870,000 to Trump's minions in government, was a complete bust.

I must say, I wasn't surprised when the press caught up to Trump Friday, and asked him about the Kodak deal. He told reporters, "I wasn't involved in it," and waddled away with no sense of shame.

Pandemic Diary Day 147: Why Kodak is not Manufacturing Drugs After Trump Touted the Company