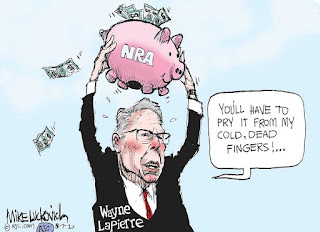 Jame's office is suing the NRA for (among other things):

** The leadership of the organization spent funds improperly;

**The leadership engaged in self-dealing;

**The leadership made false or misleading disclosures to the attorney general and the IRS.

The Lawsuit also accuses Wayne LaPierre, the NRA's longtime CEO, of using "a secret "poison pill contract" to guarantee himself lifetime income from the gun group.

These are already bad times for the NRA as the group is deeply in debt because of years of accumulated corruption.
The civil Lawsuit Alleges that when the NRA faced financial shortfalls the corporation (the lobbying wing) turned to its foundation.

The NRA's independent charitable foundation was breeched by LaPierre and cronies, who colluded with the Foundation's Board of Trustees to get millions in illegal loans.

The best thing about the State of New York lawsuit is that it seeks to dissolve the NRA. And it looks like, based upon the information gathered over the last year, the NRA is soon going to be just a bad memory.

The demise of the Trump-loving, conservative cabal the NRA lobby, will leave a lot of Republicans in a bad position. One, they're going to lose a big chunk of their income, and two, they're going to be forced to act on gun safety laws that the NRA has prevented from being passed for decades.

The NRA had a long history of thwarting the rules that govern the non-profits in New York state, Gov. Andrew Cuomo told reporters.

It looks like those days are coming to an end.

Quote for the Day: "The best time to fight corruption was ages ago, the next best thing is now." -Amit Kalantri