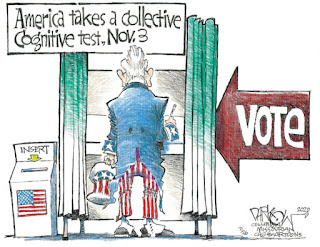 Trump made made it clear to everyone around him that after he was elected his administration would be the biggest Reality show in America.

The dizzying rise from a fading TV reality star to the president of the United States, caused Trump's already outsized ego to blossom like deadly nightshade in Western Asia.

Fact-checking Trump's daily lies hardly raises an eyebrow this far into his failed administration. Everyone - yes, I mean everyone who has eyes, ears, and can read - KNOWS he's a habitual liar.

Despite that, Trump pumps out fictional scenarios to combat reality with increasing vigor as election day draws near. The most egregious example has to be his denial of what the coronavirus is doing to the country.

Every healthcare expert in the country, and even Trump's Task Force, is warning that it's not safe to open schools across the country this fall. The decision to open, the professionals say, has to be based upon the amount of infections in a county and local School districts. Many other safety caveats have to also be considered.

In direct opposition to the experts, Trump is demanding all school districts open up, and even threatening to withhold funds to districts that don't comply with his royal decree.

As more information about COVID-19 becomes available healthcare experts have found out that children can be carriers of the virus, and a small percentage can get very sick.

That means teachers (and any other adults in the school) are more at risk of infection, and when the kids go home their family could catch the coronavirus from them.

Trump claims, without evidence, that children are immune and democrats don't want schools to open so that it hurts his re-election chances.

This unnecessary battle between safety facts and fiction during a pandemic is another element of chaos that Trump is infecting into the media. Coupled with his all out attacks against mail-in voting, Trump is doubling down on fictional claims that he believes his supporters want to hear.

This denial of reality is no surprise to anyone who knows Trump's simplistic belief that if you tell a lie long enough it becomes real.

That Trump suckled on the teat of one of the most infamous lawyers and political fixers in history, Roy Kohn (Senator Joseph McCarthy's lawyer), is common knowledge.

Watching his reality presidency slip further away every day has further unhinged Trump the narcissist, and producer of an alternate world where everyone loved him as the supreme leader.

Make sure to vote for Biden on Nov. 3rd, so we can restore reality and dignity to America.

Quote for the Day: "Reality exists in the human mind, and no where else." -George Orwell

Top 10 Sites to watch Telugu Movies O…
Crunchyroll – How to Watch Anime Onli…
Best Low Acid Coffees That Won’t Upse…
How and Why America Was Hit So Hard B…
My name is Dave Stancliff. Walk down the road of life with me each day. You'll find news, reviews, opinion pieces, art, fiction, music, and revealing slices of my life daily.