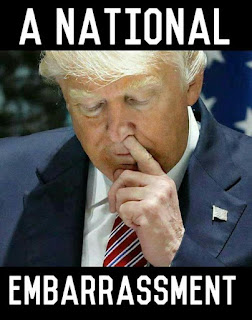 It was a slow destructive process during the first three years of Trump's takeover, but things have picked up in the last nine months.

Stories that would have been major scandals in any other administration have a lifecycle of 24-hours before the next shocking headline is delivered.

The result is Americans have become Shock Proof. Not numb. Just no longer surprised at the depth of The Donald's depravity and depredations against our democracy.

Try as I might, I can't think of another president in American history who would have stood up for a notorious serial sexual predator - Jeffrey Epstein - numerous times during his presidency.

No past president would have stood up for Epstein's co-conspirator Ghislaine Maxwell, Epstein's partner in abusing young girls for years.

But Trump does it, and we forget by the next day because he's pushing Lysol injections again and claiming the coronavirus is going away next month.

The terrible news that our GDP took the biggest hit in history, was hours old when Trump grabbed the headlines by suggesting he wanted to delay the elections. This constant chaos has become so common little of it surprises me, and I suspect many others, anymore.

Sometimes, I think back to my days as a newspaper editor and publisher, when any of these daily stories would have been a banner 90 point headline on the front page. It's sobering how quickly they plunge into obscurity today.

In an age when the president of the United States has been recorded bragging about his female conquests, and "...how you can grab their pussies, if your famous," Trump's managed to maintain a cult-like following.

The rest of America, that doesn't belong to the Trump cult, is disgusted with his corruption and divisiveness. They have all become shock proof. Trump can shout "Squirrel!" and point all he wants, but people are no longer fooled.

He's an old charlatan whose exposed himself repeatedly and Americans get the message.

Trump's clumsy-handed efforts at denying responsibility and distracting from reality, are failing. Polls point that out. Biden is leading in nearly every category a candidate could hope for.

No one will be surprised if Trump contests the election results. He's already promised to throw a presidential hissy fit well in advance of the results.

It's a good thing that Americans have been primed before election day.

Quote for the Day: "Americans became desensitized to scandalous revelation, whether it involved sex or drug use or cheating on a college exam. You could disappoint us, certainly, but we were now a very hard country to shock." -Matt Bai

5 Practical Tips on How to Use Social…
What’s brewing in Chef Harsh Kedia’s …
Comparison of Symmetric Encryption Me…
Persuasive Custom Soap Box Packaging …
Ride-Sharing App Development – A Comp…
My name is Dave Stancliff. Walk down the road of life with me each day. You'll find news, reviews, opinion pieces, art, fiction, music, and revealing slices of my life daily.