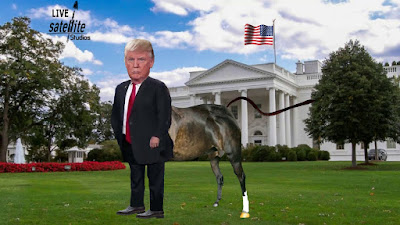 It's the start of another chaotic week as the nation warily edges toward the elections in November. The country is mired in the dog days of summer.

The nation is also enduring the dog days of Trump's regime, as he strikes out like a mad dog threatening to delay the elections, while also attacking mail-in voting as a fraudulent process.

Like a rabid dog chasing a mailman, Trump is busy sabotaging the United States Postal Service after appointing a big donor to his re-election campaign as it's new head honcho. Mission: slow down the mail as much as possible to cause a cluster fuck in November.

With the help of a pack of other deranged dogs like Jim "Gym" Jordan; "Moscow Mitch" McConnell; Mike Pence the patsy; leading lapdog Bill Barr; Lyin' Ted Cruz; "Gaslighter" Matt Gaetz; "Gomer" Louis Gompert; and the rest of his loyal bloodhounds, Trump has managed to nearly derail our democracy in one term.

It's frightening to see just how fragile democracy can be.

The United States of America is ground zero for the global pandemic. We're doing worse than the rest of the world in containing the virus with no end in sight.

The coronavirus is raging while record hot temperatures are being recorded from coast-to-coast. Our economy is staggering under the increased burdens that come from having no real leadership.

As tough as these dog days of Trump's regime are, they're only going to get worse in the fall approaching Nov.3rd. It doesn't take a prophet to know that Trump is prepared to interfere and discredit the election in any way possible.

I suspect when Trump loses the election authorities will have to wheel him out in a cage and take him to a kennel for mentally ill dogs somewhere in Puerto Rico...

Quote for the Day: "Every summer: 'Let's make this the best one yet!' End of Summer: "Wow! This summer sucked!" -Unknown

Crunchyroll – How to Watch Anime Onli…
Best French Press Travel Mugs for Tas…
Wealthy Affiliate Scam or Not
My name is Dave Stancliff. Walk down the road of life with me each day. You'll find news, reviews, opinion pieces, art, fiction, music, and revealing slices of my life daily.