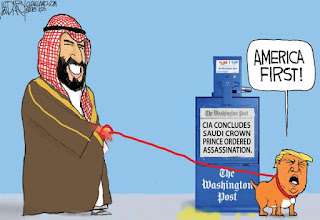 Science may never come up with a better office communication system than the coffee break. -Earl Wilson

It's not easy for those cowardly GOP senators to stand up to Trump.

But there seems to be one subject that is forcing them to "grow a pair."

Defying the orange ape's efforts to protect Saudi Arabia from answering for the murder of Washington Post columnist, Jamaal Khashoggi.

Republican flip flop artist, Lindsey Graham defiantly claimed, "There's no amount of oil coming out of Saudi Arabia and there's no threat from Iran that will get me to back off," in reference to holding the Middle Eastern Kingdom responsible for the journalist's grisly murder.

Graham's comments came after a bipartisan coalition of senators are attempting to block 22 arms sales to Saudi Arabia, which Trump has attempted to push through despite significant bipartisan opposition.

The rest of the world knows bin Salman is a bloodthirsty
tyrant who doesn't hesitate to kill his enemies (real and perceived) with impunity. Trump doesn't care.

A recent international report concluded the whole murderous operation was bin Salman's work. American senators and members of the House are unanimously opposed to selling arms to his murderous regime.

But Trump, being Trump and dumb as a rock, has rejected all advise and proof, and is still trying to bulldoze his military gift package past lawmakers to please Saudi Arabia.

Trump cronies, like Mike Pompeo, insist the Trump administration is not trying to cover up Khashoggi's grisly murder. No one believes that but Pompeo, and some other zombie members of Trump's cabinet.

Once again, Trump is not only embarrassing America, he's selling us out.

The East winds of Digital Currency Ga…
How to Create a Winning Black Friday …
A guide to male enhancement – Tacklin…
OPINION - Shields and Brooks 9/6/2019
My name is Dave Stancliff. Walk down the road of life with me each day. You'll find news, reviews, opinion pieces, art, fiction, music, and revealing slices of my life daily.