What Happens When People No Longer Believe in The Truth? 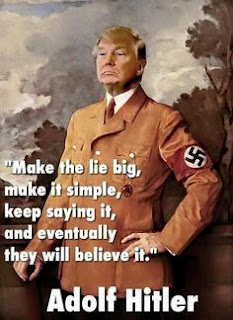 Good Day World!
Where do we go from here?
The national discourse on the subject of Truth shows that facts are being questioned, because our Liar-In-Chief rejects them whenever they become uncomfortable.
Despite having witnesses, Trump insists he did not say African countries were "shitholes." When two attending Trumpies said they couldn't recall him saying that, people were confused.
Did he, or didn't he say that? Now we find that the word he may have used was "shithouses" (like that's any better). Therefore the two Trumpies avoided incriminating their master and technically didn't lie.
But he did lie about what he said according to other witnesses.
Even when Trump is recording lying, his minions deny it. They'll say anything to protect him. One of their favorite strategies is to say Trump was misquoted.
For example:
The White Houses accused The Wall Street Journal of misquoting Trump recently:
According to the White House's Press Secretary, Sarah Huckabee Sanders;
"President Trump said 'I'd' probably have a very good relationship with Kim Jong Un of North Korea. I'D - I'D - I'D, NOT I."
The Journal said it stood by its reporting, releasing the audio from the selected portion of the transcript, shortly before the White House released their own doctored audio recording of the interview.
Again. It's always a battle of truth versus Trump. Our shameless president encourages others to "creatively lie." (See his book Art of the Deal.)
He lies on the average of 5-6 times daily. (See PoliticFact or The New York Times collections of his lies just since he was elected.
The fact that Trump doubles down on his lies, even when they're exposed, shows his contempt for the truth.
It's telling that truth is such a big issue today, with partisan puppets protecting Trump's attacks against the free press when it doesn't speak nicely about him.
Trump's motto: Divert, and lie without shame.
Poll after poll, shows the majority of Americans know Trump lies repeatedly. After one year of Trump being in power, many Americans have become confused about what the truth is.
They don't understand why the president gets away with his lies. Where right or wrong was once clear cut, Trump has introduced a deadly virus of doubt into mainstream America.
Where do we go from here, if this virus isn't stopped?
Time for me to walk on down the road...

What Marathon Running and Successful …
Does a Political ad Create a Problem …
Remembrance Day, as Seen Through the …
Four Things Jesus Says About a Discip…
Can I tell you the truth?
My name is Dave Stancliff. Walk down the road of life with me each day. You'll find news, reviews, opinion pieces, art, fiction, music, and revealing slices of my life daily.

What Happens When People No Longer Believe in The Truth?