The Russian city being eaten alive by giant sinkholes

They may look like stills from an apocalyptic horror movies, but these is a daily reality for residents in a Russian city.

Citizens of Samara, in south east Russia, live in fear of the ground literally disappearing beneath them after huge sinkholes have started to appear all over their city, leaving devastation in their wake. 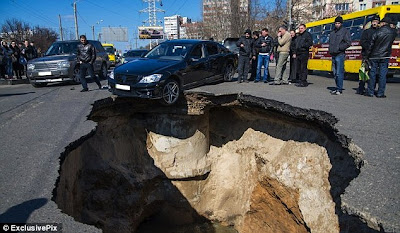 The yawning underground caverns are all believed to have sprung up in recent weeks swallowing cars, buses and claiming at least one life.

The sinkholes, some large enough to swallow an entire truck, are believed to have been caused by ground subsidence.

The citizens of the city have now signed a petition urging authorities to find a solution.

Citizens in Berezniki, Russia, have also been plagued by sinkholes.

They are also common in Florida, America.

The Russian city being eaten alive by giant sinkholes