The Dark Side Of The Moon

The far side of the Moon, sometimes poetically called the "dark side of the Moon", is the lunar hemisphere that is permanently turned away, and not visible from the surface of the Earth. These side also haven't seen the sun in millions, and even billions of years.

What cause it? Tidal forces from Earth have slowed down the moon's rotation so that the same side is always facing the Earth, a phenomenon called tidal locking. 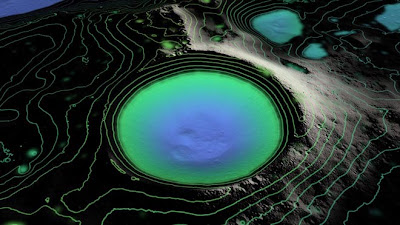 The far hemisphere was first photographed by the Soviet Luna 3 probe in 1959, and was first directly observed by human eyes when the Apollo 8 mission orbited the Moon in 1968.

On June 2009 NASA launched the $504 million LRO mission. The spacecraft is equipped with a suite of instruments, including a laser ranging tool, to create the most-detailed ever topographical maps of the lunar surface of its mysterious shadowed regions. The lunar probe also has tools designed to measure temperature and neutron absorption in the moon's darkest corners.

Surprisingly, NASA scientists have found the crash site of a spacecraft set into orbit during the early 60s. They believe it is the missing Lunar Orbiter 2 which disappeared back in 1967 during a passage over the far side of the moon, when the craft went out of telescope and radio range.

Finally, some conspiracy theorists, notably Milton William Cooper, have alleged that some Apollo astronauts had seen UFOs on the far side of the Moon but were told to keep quiet about them. Some have allegedly reported seeing an alien base (code named "Luna") and even encountered aliens who told them to stay off the Moon. Some photographs circulated on the Internet purport to show a large "castle" on the Moon. However, NASA describes these claims as hoaxes, and in 2006 announced plans for manned missions to the far side of the Moon. Communication between the far side and Earth would require a relay satellite, perhaps at one of the trojan points.

Why am I Fighting My Own Self-Care?

The Dark Side Of The Moon