OTT Webseries Blues In India: Tandav Just A Beginning Of The Tandava? 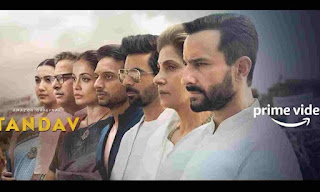 It seems, reasonably enough, that the outrage was waiting to happen. The growth of the Over-the-top Media services platforms (OTT) that distribute video streaming over the internet, has been tremendous in the last eight years in India; in 2018 its market worth was more than INR 21.5 billion which has grown to INR 35 billion in 2019 and it is around INR 40 billion now. The market worth is expected to grow at the exponential rate of 45% to reach around INR 138 billion in 2023 and over 158 billion in 2024. The platforms enjoy a viewership of more than 1.7 billion subscribers currently which is likely to rise to a whopping 5 billion this year, making it the second-biggest OTT market after the US. Except for Reliance Entertainment’s launch of BigFix in 2008, the biggest of the 40-odd OTT platforms like SonyLIV, Disney-Hotstar, Netflix, Amazon Prime, Voot, JioCinema and Zee5 started operations in India during 2013-18.

JoJo Siwa le presenta al mundo a su n…
Market gapped down on Covid fear, new…
How to Organize a Blog Post and Struc…
HEALTH AND WELLNESS EXPLAINED ~ E…
Sex on Your Period – Reasons to Do It

Initially, the OTT platforms were streaming released feature films, documentaries, short films and the like, but over time they have launched themselves into their own video productions of movies, shorts and most importantly, the Web Series, and then streaming those to their subscribers who can enjoy in their smartphones, laptops and desktops. Here lay the catch: there have been established regulatory bodies for print and electronic media; for advertising spots; and for the visual media comprising of feature films, documentaries and any other theatre-releases; however, for the OTT platforms, called Digital Media that includes social media and all other online expressions, there were no regulatory bodies, and this gave them a distinct advantage over others.

After watching the streamed videos, particularly the Webseries with up to 9-10 episodes, one feels, again reasonably enough, that what the filmmakers cannot afford to do in the to-be-certified film productions, they can do it in the most self-indulgent ways in the OTT productions. This means: they can allow their actors to mouth all of the slangs/abuses in wanton abundance, they can show explicit sex scenes in graphic indulgence and can also have violence beyond measure, in full gory details. This huge advantage was bound to raise concerns and alert the vigilante hardliners, sooner or later.

While the other forms of media, despite being regulated, have been facing attacks from the hardline groups and the fringe elements, the Webseries productions, despite showcasing much bolder content, continued to enjoy some kind of immunity except for the occasional PIL. This scenario is perhaps explained by the fact that the OTT platforms mostly cater to the urban users having the required facilities, and the viewing being primarily personal with headphones plugged in. Thanks to the Digital India connectivity campaign, the emergence of the Jio mobile-phone and internet services, and the consequent crash in mobile and internet charges all over, the subscriber-gates also opened up to the huge sector of rural India.

Naturally then, the Government of India started thinking about bringing the enormously growing digital media as a whole under its regulation. The mandarins of the OTT management sensed it too, and they worked out a self-regulation formula, coming together, sometime in early 2020. But the Government rejected this proposal, and eventually in November 2020 the Government of India, through a Gazette notification signed by the President of India, brought all of digital media under its control, that is, under the ambit of the Ministry of Information and Broadcasting. After volleys of protests and concerns, the picture is still not clear as to how this regulation would work out in practical terms.

And finally, all hell broke loose as the Hindutva groups protested vehemently against Amazon Prime Video’s new Webseries, Tandav (Catastrophe), objecting against some scenes in the Series supposedly making a mockery of Hindu Gods. The Government of Uttar Pradesh went to the extent of lodging FIRs against the producers of Tandav, and threatening even arrests. The national ruling party, as usual, came out in full support of the chorus for action with some of its leaders pledging to bring those producers to book, at any cost. The producers were also summoned by the Ministry of Information and Broadcasting for explanations. The stirrings transformed into a full Tandava as objections were also raised against Amazon’s most popular Webseries ‘Mirzapur’-seasons 1 and 2, after months of the streaming.

Whatever be the premises of the objections, it must be pointed out here the concerned Webseries Tandav is a very poorly-made and ridiculous one, and it doesn’t even deserve controversy and free publicity.

We can give two laughable examples here: first, the Prime Minster of India as portrayed in the Series, is dining alone in the huge hall without even a single uniformed attendant around, and obviously there were no security guards or reception lounges outside as her political rival barges in, sits beside her, snatches her plate and starts eating it himself while delivering the dialogues; second, one lady carrying a bag of INR 10 million in her car, enters the most protected VVIP area of the supposed national capital, gets down from the car with the bag, walks to a street-dustbin and pushes the bag in, then she walks into another campus, confronts one more dustbin, turns it down spilling over the items, selects her designated item and leaves in her car, and while she has been doing all these actions not a soul was visible around the big area, forget about security personnel or other cars. To such numerous other scenes, objections can be raised too, by even neutral connoisseurs of art and cinema. But why at all? The best thing is to let a bad work of art sink without a bubble.

However, that is not the sense that is prevailing now. Amazon Prime and all the crew members of Tandavapologized unconditionally, and even the disputed scenes have already been deleted. But no! the self-styled protectors of religion and culture would see them arrested and punished lest others dare to! In a society that is already polarized and deeply divided, this does not augur well for the future of the art and creativity of the country. Unfortunately, this Tandava, not at all related to the revered Lord Shiva, is only set to intensify further. It is high time the Government of India comes out with specific details of the intended regulatory measures.

OTT Webseries Blues In India: Tandav Just A Beginning Of The Tandava?