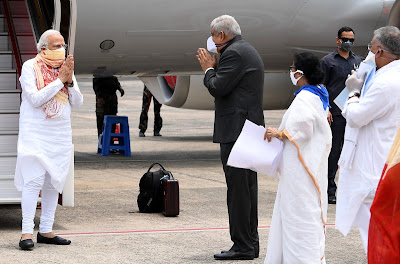 When the extremely severe cyclonic storm Amphan hit Kolkata and adjoining districts of West Bengal in the evening of 20th May, 2020, with a speed ranging from 110 to 133 km per hour the damage could very well be anticipated. West Bengal is not new to cyclones originating in the Bay of Bengal, in fact, three cyclones namely ‘Fani’, ‘Bulbul’ and ‘Amphan’ swept over the state within a span of one year only—from May 2019 to May 2020. However, the force and speed of Amphan was unprecedented in the state as some point out that the areas had not seen such a severe cyclone in 283 years. By late night that fateful day, closeted in the control room of her secretariat in Howrah, Chief Minister Mamata Bannerji, distressed and sad, said while briefing the media online that a few districts of her state and Kolkata were totally destroyed and it would take days to assess the damage apart from the loss of lives. She desperately hoped that the central government would come in with some help as her state was already drained of resources with the battle against COVID-19 raging on. Didi, as she is popularly known, also hoped Prime Minister Modi would come and see the damage for himself. And, the Indian Prime Minister responded magnanimously, announcing the very next morning his decision to visit the state on 22ndMay.
Political differences between BJP-ruled central government and TMC-ruled West Bengal state government are only too well known with both parties not stopping the rivalries and the parleys even during COVID times, in fact, fighting over COVID issues in recent days. Therefore, Mamata wishing for Modi’s presence and Modi’s gesture in coming immediately is being viewed in a new light: that they have come together in a spirit of cooperation in the time of crisis, setting aside politics for the moment. The Prime Minister expressed full solidarity with the state government—hit by twin-tragedies, and praised its efforts in tackling both the catastrophes. He assured full help at every step of the way ahead—restoration, reconstruction, rehabilitation and the like, and announced a preliminary financial package for immediate expenses.  Later in her media brief at the airport after seeing off the Prime Minister, Mamata Bannerji appreciated Modi’s visit and his promise of joint efforts, not saying anything against the offer of help as claimed by a ‘national’ news channel that started carrying supers ‘Mamata Slams Aid’.
Unfortunately, Maharashtra wing of the BJP failed to learn any lesson from its central leadership bonhomie, and selected this same say to stage public protests all over the state claiming the state government’s mishandling of the COVID fight, perhaps the very first instance of such kind in the worldwide war against the killer virus. One of their allegations, as puerile as it sounded, was that why Maharashtra has witnessed such a spike in cases while Kerala handled it so competently. Well, ‘serving’ the interests of the local people for decades they still don’t understand why Mumbai is Mumbai, and why it should have the largest number of COVID-19 infections, like, in a similar way, why the virus should select New York for its special treatment. In totality, they must understand that COVID is not a political phenomenon and doesn’t go by who ruled which state. At this hour of crisis for the state the best option for them is to inspire the people to follow the precautions religiously and to jump in the fray for total cooperation. Perhaps, in India, political parties need multiple tragedies strike in unison to make them lose their political rivalries and power-hungry politics, even if for the time being.