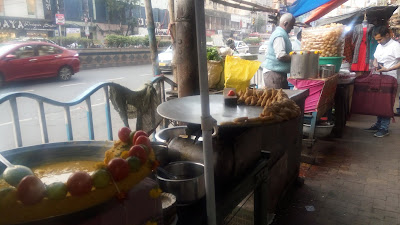 Kolkata (Calcutta of yore) is still called the city of joy, in my view, for one basic reason: things are very cheap here considering the fact that it is one of the four Metro cities of India—apart, of course, from its treasure house of classic and progressive literature, three Nobel laureates, its enriched culture and heritage. To retain our emphasis, it offers the cheapest options in almost all fields of life: for example, metro train fare is still pegged at minimum five rupees which you’ll find nowhere else; other public transport fares are also the lowest in comparison with other Indian cities, it is a different matter altogether if the comfort quotient here is probably pushed into oblivion; auto-rickshaws are mostly shared for which you need       only a few coins in your pocket, and the app cabs are also forced to abide by low fares due to which the aggregators indulge often in orgies of mad surge prices, picking any occasion or the time; if you are a voracious reader you can find all of types of books at throw-away prices with a novelty of book-vendors enticing you to shop books; and of course, the culinary delights at mouth-watering prices. Basically, it seems that the enlightened people of the city are averse to paying high prices for the basic amenities which they consider their rights, and for that life-support system they are ever ready to sacrifice all thoughts about comfort or luxury. The governments or the authorities, therefore, think thrice before deciding to increase any public utility charges, and there ensues the politics of pricing, if we can say that. This is public knowledge that the metro railway fares in the city could recently be increased only after decades of indecision: interestingly, some of the people who think too much about the indignity of being pushed or crushed on a daily basis had been crying hoarse for years urging the authorities to please increase the fares. Anyway, here we intend to deal only with the eating part—that is, eating outside, to be specific.
Most of the public eating places here consist of road-side joints, mobile vendors and make-shift claustrophobic interiors claiming to be restaurants. When you look at metros like Mumbai you find restaurants of all grades offering a range of prices for various categories of customers at almost every street or lane or stations. You realize the crux of it the moment you compare the cost of eating outside: here in Kolkata road-side joints you get even tastier and steaming-hot items at one-third of the price you pay in a Mumbai restaurant. Locals here, of course, caution you: the kind of oil that the eateries use is of the lowest quality and the kind of meat they cook is of a very suspicious nature which can make you sick, if you gorge on the incredibly-priced dishes of all kinds; but as far as they themselves are concerned they say they have got immune to it through decades of gastronomic economy and so, nothing happens to them. Whatever be the way of life here, you’re bound to get angry, irritated and disconsolate at times, because it doesn’t suit you all the time.
That day I had an errand to accomplish in the afternoon session, and after a gruelling three-hour engagement I finally freed myself. As I pondered whether to head straightaway to the metro train station or to try fulfill an uncontrollable desire building up inside my noble soul I finally voted for the latter which was very simple and humane: I just wanted to sit at a nice eating place and have a steaming cup of tea with perhaps a snack. And then the ordeal! 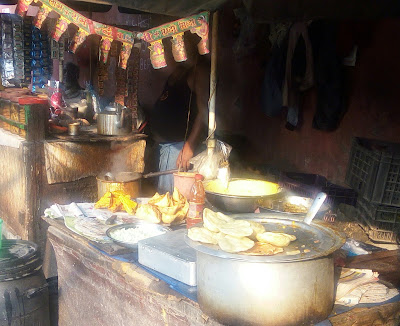 I walked up and down, across, and around all the streets or lanes in the congested locality—searching for a restaurant where I can sit in comfort. An hour elapsed, my legs aching in protest; and I could find not a single place where I could sit to drink-eat. All the while the road-side joints, the stalls displaying all kinds of food and vendors carrying five-buck teas and cakes beckoned me, invited me or even mocked me. But no, I’ll not eat standing, I need to sit and eat like a human being who really needs to sit down on various other occasions, I decided firmly. My decision was to no avail as the city dogmatically refused to yield me a place, and finally I had to trudge up a distance again to the Metro Station to take a train home—joyless.
On another day, to make matters worse, I had my wife with me. We went to visit a museum, and my wife having taken extreme pain to inculcate the ideals and meanings inherent in all the architects on display our sojourn got expanded to several hours of moving around standing with the pangs of hunger suddenly starting to torment us. When, finally, we hit the narrow and high-traffic street outside we were ravenously hungry and desperate to sit down, again at a nice restaurant, and have a meal. Someone advised us to take a stroll towards the nearest metro station by means of which we would definitely find a hotel—he was sure one good hotel existed. 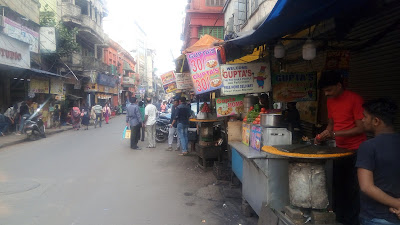 It turned out to be an endless stroll; and again, only the vendors or tea-makers accosted us. My wife starting to curse, and we nearly out of patience, finally we did find that good hotel. My discerning eyes, however, could find nothing ‘good’ about the much-hyped place: the lone hotelier or the manager or the cook was crouching behind a glass-paned wooden box displaying a few cooked items, and there were only a few metal stools looking up to an elongated desk across the side wall—supposedly the sit-and-eat positions. I took a courageous step inside, and asked the person as to where be the menu or the items available at that late-lunch hour. The hotelier or the manager or the cook, chewing a paan (betel nut-leaf mix) in delicious abandon, looked annoyed, and asked me to read the board displayed outside. In fact, I noticed the longish board fixed quite high up outside while entering the place. Unfortunately, reading the board would involve craning the neck to such an acute upward angle that there was the risk of falling backwards and that was even more dangerous as the traffic roared just by the side of the tapered stone pavement. I decided to give up; my wife having already taken the decision to walkout on hygienic consideration—the paan-chewing visage of the hotelier or the manager or the cook presenting a rather dirty picture for her.
However, we were still firm on our stand—we won’t stand and eat. Finally, again, we had no option but to trudge up to the metro station to take a train home—joyless.

Wanted man discovered living in Pilla…
How To Get From Lima To Cusco Peru {T…
FRED Energy — Looking Towards Future …
Best Graphics Cards for Gaming at 108…
Where did the hummingbirds go?