A suspected ISIS bomber has detonated an explosive in the street of Turkey at a Wedding Celebration in the southern Turkish city of Gaziantep killing 50 at the spot while the injured has been rushed to nearby hospital for treatment.

When You and Your Best Friend Had an …
5 Popular Jewelry Gifts For the Speci…
With GiftstoIndia24x7.com, this Raksh…
The Best LED Lights Home Decor in 202…
AGAINST ALL ODDS We Found The Perfect…

President of Turkey Tayyip Erdogan spokesperson confirmed the attack said 50 persons were confirmed dead,while more injured has been taking to the hospital

A 25 year old Velu Can who confirmed to a local reporter said,the Wedding celebration was almost coming to an end when suddenly heard a loud explosion among the people dancing,bloods stains and body parts littered every were, he said.

Forensic test would need to be conducted to identify victims body,security source said. 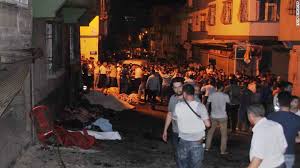