Declining iPhone Sales Is Only Half the Story

The overpriced smartphone maker took a 5% hit in revenue in Q1. While profits plunged 16% to $11.5 billion — due in large part to a sharp decline in Apple’s flagship product, the Iphone.

The Fall of the King

Steve Jobs wore turtlenecks year round and didn’t believe in showering (not a joke). But as the smelly face of Apple, Jobs was able to consistently convince the world they needed the latest iPhone.

Under CEO Tim Apple, however, the iPhone (though generally well-reviewed) has lost some of its prestige and that “must-have” veneer. (For some reason, those darn millennials would rather pay their rent than shell out $1,500 on a phone.)

Sales of the iPhone were down 17% in Q1. But it’s worth noting that the Apple of today faces some unique challenges that the man in the mom jeans never had to deal with.

Chinese companies like Huawei and Oneplus are flooding the market with cheaper smartphones with high-end features and slick design that rival Apple’s own vacation-fund killer.

In fact, users like these phones so much that they’re sticking with a single model for longer. And unnecessary and frequent upgrades are Apple’s bread and butter. (You know what they say. An Apple a day keeps the investor’s off Tim’s back.)

Despite the decline in profits, Apple’s outlook for the future was positive. Positive enough that Apple shares (NASDAQ: AAPL) were up 6% in the pre-morning trading.

Apple will need a big idea to course correct the iPhone’s decline. And without the man in the mom jeans and sneakers leading the charge, I don’t know if it’s heading in the right direction.

For now, Apple’s banking on the growth in services to make up for the drop in iPhone sales. Which puts a lot of pressure on its upcoming streaming service.

(This better be the best autobiographical comedy about the life of Emily Dickinson in the world.)

I’m not an iPhone user. But I’d like to hear from those of you who are (or were).

Have you switched to a different phone? If not, why? What keeps you coming back to Apple?

Click here send us a quick email and we’ll discuss it in the Readers Comments section next week.

Attorney General and retired Fred Flintstone impersonator William Barr has been testifying on his handling of the Mueller report before the Senate judiciary committee all day today.

It’s been a long old day for Barr. At time of writing, the president’s biggest fan is still being questioned, and the House has voted to bring him back in for another round of questioning tomorrow.

That being said, here are the highlights of today’s proceedings:

Barr was surprised Mueller punted the decision on the obstruction of justice charge to him.

“We were frankly surprised that they were not going to reach a decision on obstruction, and we asked them a lot on the reasoning behind this and the basis for this,” Barr testified. “We did not understand exactly why the special counsel was not reaching a decision, and when we pressed him on it, he said that his team was still formulating the explanation.”

Barr believes Mueller should have ended his investigation when he realized he couldn’t make a judgment.

“If he felt he shouldn’t go down a path of making a traditional prosecutive decision then he shouldn’t have investigated. That was the time to pull up.”

Barr says he offered to let Mueller read the four-page summary before it was published.

“That’s what we were trying to do: notify the people as to the bottom line conclusion. We were not trying to summarize the 410-page report. So I offered Bob Mueller the opportunity to review that letter before it went out and he declined.”

Barr said he will investigate FBI spying on the 2016 Trump Campaign. (And defended his use of the word “spying.”)

“These are the things I need to look at. To the extent there was any overreach, it was a few people in upper-echelons of the bureau and perhaps the department, but those people are no longer there. I am working with Chris Wray, who has done a great job at the bureau. We are working together to reconstruct exactly what went down.

“I think spying is a good English word that doesn’t have synonyms because it is the broadest word incorporating really all forms of covert intelligence collection.”

“By flipping, he meant succumbing to pressure on unrelated cases to lie and compose in order to get lenient treatment on other cases. Discouraging flipping in that sense is not obstruction.”

NO CAPTION NECESSARY (by Shane).

Barr and Klobuchar sitting in a tree…

Presidential candidate Amy Klobuchar asked Barr to support a bill to protect against Russian interference in the 2020 election. “What I would like to know from you as our nation’s chief law enforcement officer if you will work with us to get this bill done,” she asked. “Otherwise we have no clout to get back up paper ballots if something goes wrong in this election.”

Barr responded: “I will work with you to enhance the security of our election, and I will take a look at what you are proposing. I’m not familiar with it.”

“The Russians interfered in our election,” said the tiny southern man. “I would like to do more to harden our infrastructure because the Russians did it. It wasn’t some 400-pound guy sitting on a bed somewhere. It was the Russians. And they’re still doing it.”

Barr says it’s up to the American people to decide for themselves.

“I didn’t exonerate. I said that we did not believe that there was sufficient evidence to establish an obstruction offense which is the job of the Justice Department.

“The job of the Justice Department is now over. That determines whether or not there is a crime. The report is now in the hands of the American people. Everyone can decide for themselves: There’s an election in 18 months.” 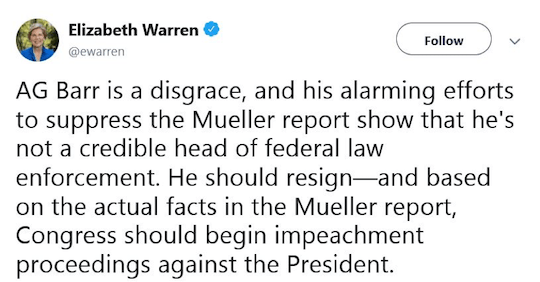 Warren has only one setting and it’s ELEVEN!

Venezuela’s Revolution Falters Before it Begins

Venezuela had itself a bit of a little political uprising yesterday. Unfortunately, the attempted coup, led by opposition leader Juan Guaidó, didn’t go exactly as planned. (Don’t you just hate it when your coup doesn’t go the way you want it to?)

Until now, Guaidó (who is officially recognized as Venezuela’s leader by the U.S.) has been all about a peaceful takeover. But after a months-long political stalemate with the “democratically elected” dictator Nicolás Maduro, Guaidó has said “**** it. Let’s have an uprising.”

“This is the moment,” said Mr. Guaidó.

Reportedly, following Guaidó’s impassioned speech, Maduro’s own spymaster swapped sides and joined Guaidó’s cause. And yet Guaidó did not get the response or firepower he expected from the ranks of Venezuela’s military. (This really is a tank-less job.)

More than 60 people were injured in the resulting clashes between soldiers and the Venezuela people. Footage was captured of soldiers in an armored vehicle smashing into a group of protestors.

Speaking this morning at a press briefing on the White House Lawn, U.S. National Security Advisor and human mustache John Bolton said Maduro spent yesterday “not in the company of Venezuelan forces, but surrounded by Cubans because he doubted the loyalty of the Venezuelan armed forces.”

“Maduro is now surrounded by scorpions in a bottle and it’s only a matter of time.” (A great line for his actor reel.)

Guaidó’s uprising may not have gone as planned but the revolution is far from over.

Protestors took the streets again this morning. And according to Secretary of State Mike Pompeo, Maduro has a plane on the tarmac waiting to take him to Cuba at a moment’s notice (I hear its lovely this time of year).

Expect some big developments in Venezuelan politics in the next few days.

Hedge Funds Are Watching You (From Space)

As the SEC increasingly cracks down on insider trading, hedge funds are having to think outside the box to get the inside scoop on potential investments.

And you don’t get more outside the box than outer space.

According to a report by the Financial Times, forward-thinking hedge fund managers are using satellite tech to survey potential investments from space.

By creeping on Walmart parking lots with satellites, UBS analysts were able to count the number of cars visiting each month. By cross-referencing that data with unemployment figures, UBS was able to produce a more accurate forecast of Walmart’s revenue.

Since then, other hedge funds have jumped on the watching-you-from-outer-space bandwagon.

“Satellite images can demonstrate which of two neighboring mines is producing the most coal, for example.”

This new way of analyzing data holds enormous potential. My researchers are watching this one closely (with regular human eyes. No satellites).

Click here to send us your comments and tell us what you think. Do you agree with us? Do you think our ideas are stupid? Bring it on. We can take it.

When I saw my email inbox this morning, and saw the hundreds of new emails, I racked my brains to think of what I did wrong. Had I somehow insulted Beyoncé? Implied the [insert sports team] were bad at [insert sport]? Was it the cauliflower rice?

Well, as it turns out, a lot of you wanted to have your say about the Democrats subpoenaing Trump’s finances. Obviously, I can’t print or answer all of these emails. But here’s a cross-section of all the mail we received yesterday evening:

I’m all down for them they’re doing the work for the country and the people. — Paul H.

”Personally, I think this is a blatant abuse of power. This is all being done because the Democrats just can’t believe they lost the election in 2016. They look like really sore losers to me.” — Lowell L

“I believe that congress is simply trying to actually get some transparency in all of the mess. If there is nothing to hide why try to block it?” — Bradley

“Nothing but partisan politics. I don’t blame the president one bit for the actions he is taking. The democrats will do anything possible to try and discredit the president and try to unseat him in the 2020 elections. Shows how desperate the democrats really are, 21 candidates running and they are all idiots. Let convicts and illegals vote, reparations for descendants of slaves, wipeout all student loan debt, ignoring the border crisis, etc.” — Larry S.

“Trump believes he’s above the law. It’s a shame he has to be ordered to do what’s right, but so be it.” — Bryant M.

“As usual the dems power stall because they move on and don’t focus. Weiselberg as advised by Cohen has more insight and damage to Trump family but no subpeona.” — Kelly A.

“The house oversight committees are exercising their constitutional responsibilities to conduct oversight of this administration and that is the way it should be.” — M. Yee

As you can see, this subject divided One Last Thing readers pretty much 50/50. But one subject readers aren’t divided about… is cauliflower rice.

“I see product labelled as ‘riced’ cauliflower, not ‘cauliflower rice’. The labeling is clear. If anyone is confused by it, they should not be allowed to vote.” – John E.

“Sweet potatoes aren’t potatoes and peanuts aren’t nuts, so I really don’t see that the rice mafia has a leg to stand on.” — Nancy J.