Back in the 90s, my parents were flat broke.

I didn’t find out about this until years after the fact. I had been living overseas at the time, so most of our “catching up” was done through short and expensive monthly phone calls.

These were the dark days before Skype “connected” the world with a five-second delay.

Apparently, mom had lost her job. And the old man took a massive pay cut during a round of layoffs. But they kept on spending like nothing had changed.

A wide screen TV for Christmas…

All of it went on the credit cards. And it started to rack up fast.

I don’t think dad even realized just how bad it really was. He always let mom “handle the finances”.

And mom… well, mom made a few bad decisions (sorry, mom) and let the situation spin out of control. When they finally faced the music, they owed $45,000 in credit card Debt. That was on top of their pricey mortgage repayments (which they had refinanced a few years earlier to build an addition).

It demolished their savings and the next ten years were miserable and austere.

But the worst part was, if they had just swallowed their pride and admitted they were broke, it wouldn’t have gotten anywhere near as bad as it did.

You’ve probably guessed by now that I’m telling you this story to make a not so subtle point.

How Did We Let This Happen?

The United States is going broke… and nobody is doing a damn thing about it.

Our National Debt has risen to a colossal $22 trillion. And if we keep spending like we have been, that figure is going to rise to as much as $28.4 trillion by the end of Trump’s presidency.

And don’t get me wrong. I ain’t pointing the finger at Trump. Both parties are at fault here.

Because everybody says they’ll lower the national debt if you elect them. But nobody actually wants to do the hard work of curbing spending.

After all, nobody wants to go down in history as the sensible president who reduced the debt.

They want to create jobs. And renovate city centers. And be remembered as a president that made everything better for everyone.

And that takes money. A lot of money. 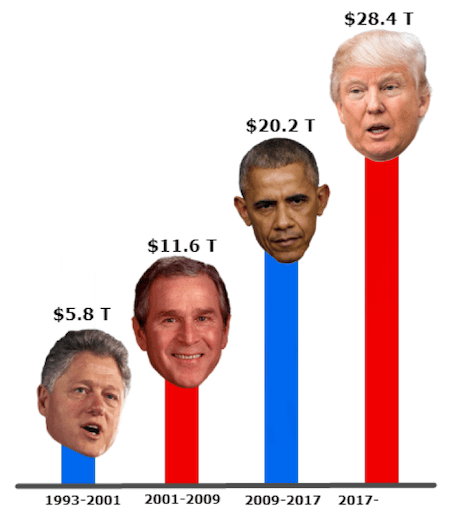 As soon as these guys get into power, they start spending left and right. And tell themselves “I can make a real difference with all this money. The next guy can deal with the debt problem.”

But there comes a breaking point. A point where the can can’t be kicked down the road any longer. A point where a full-blown financial crisis is all but inevitable.

Economist Jim Rickards says we have already passed that point. Jim breaks it down and reveals how to protect your wealth from the coming crisis in today’s issue of Money & Crisis.

P.S. Jim doesn’t make “predictions.” He looks at the numbers and simply calls it as he see it. That’s how he called Trump’s win, Brexit, AND the 2008 financial crisis. But what’s coming next is his biggest, most world-changing prediction to date.

Discover the elite’s plan for the coming crisis in his new book, The Road to Ruin: The Global Elites’ Secret Plan for the Next Financial Crisis. In it, Jim reveals the powerful strategies you can use to protect your money and your family from the next crisis. Claim your FREE copy now.

Every analyst who studies the U.S. national debt (I’m one of them) is wondering how long this debt levitation act can go on.

The U.S. debt-to-GDP ratio is at the highest level in history (106%), with the exception of the immediate aftermath of the Second World War. At least in 1945, the U.S. had won the war and our economy dominated world output and production.

The U.S. has always been willing to increase debt to fight and win a war, but the debt was promptly scaled down and contained once the war was over. Today, we have the debt without the global dominance. There is no war comparable to the great wars of American history, and yet the debt keeps growing.

The celebrated James Grant of Grant’s Interest Rate Observer has provided an overview of the U.S. national debt since George Washington and Alexander Hamilton.

Grant makes the point that the debt has been increased and decreased on a regular basis but never until today was there a view that the deficit didn’t matter and could be increased indefinitely.

He points out that it took the United States 193 years to accumulate its first trillion dollars of federal debt. And amazingly, that it will add that much in the current fiscal year alone.

Grant also describes how these historic debt management efforts have been bipartisan. Republicans Harding and Coolidge reduced the debt. And the Democrat Andrew Jackson actually eliminated the debt in 1836.

It Takes Two to Tango

Today, both parties are guilty of extravagant waste.

The U.S. budget deficit under Trump is fast approaching $1 trillion per year, similar to what we saw in 2010 and 2011 under Obama.

This is the result of the tax cuts (that don’t “pay for themselves”), removal of spending caps, snowballing student loan defaults, and defective growth estimates by the Office of Management and Budget.

Annual deficits will exceed the trillion dollar level as soon as this year when projected spending is factored in. With growth now fading after the Trump tax cut boost (there will be no tax cuts in 2019), the debt-to-GDP ratio is now up to 106%, since debt is growing faster than GDP.

As Grant points out, the national debt has registered compound annual growth of 8.8%, but only 6.3% for GDP. That’s not a sustainable situation. And it’s not at all clear that GDP will close the gap.

The United States is Going Broke

I’m not looking to scare people.

This is just an honest assessment, based on the numbers.

Right now, the United States is nearly $22 trillion in debt. Now, a $22 trillion debt would be fine if we had a $50 trillion economy. The debt-to-GDP ratio in that example would be about 40%.

When is the debt-to-GDP ratio too high? When does a country reach the point that it either turns things around or ends up like Greece?

Economists Ken Rogoff and Carmen Reinhart carried out a long historical survey going back 800 years, looking at individual countries, or empires in some cases, that have gone broke or defaulted on their debt.

They put the danger zone at a debt-to-GDP ratio of 90%. Once it reaches 90%, they found, a turning point arrives. At that point, a dollar of debt yields less than a dollar of output. Debt becomes an actual drag on growth.

We are deep into the red zone. And we’re only going deeper, with trillion dollar deficits and more spending on the way. We’re getting more and more like Greece.

We’re heading for a sovereign debt crisis. That’s not an opinion; it’s based on the numbers.

Again, this has been a bipartisan effort. Republicans have in many ways been just as reckless as Democrats. Trump’s policies merely continue the trend. But the latest proposals coming from leading Democratic politicians will only make things worse.

Democrats are in a race to see who can move furthest to the left and be the most radical. So far, Elizabeth Warren is winning. Warren is not satisfied with the proposal to raise individual income tax top rates to the 70% to 90% range.

But income taxes have always been a slippery source of revenue for governments. Back in the 1950s and 1960s, it’s true that certain income tax rates were in the 70% to 90% bracket. These super-high rates usually applied only to “unearned income” such as dividends and interest, but they were real nonetheless.

What is left out of that story is that the tax code was loaded with deductions and credits for investment in oil, real estate, new equipment and many other categories. Investors could claim investment tax credits, accelerated depreciation, depletion allowances, and much more.

Best of all, the tax losses from one investment could be written off against other income, (say, from a doctor’s or lawyer’s ordinary income). The result was that when statutory rates were 70%, the effective rate (the amount actually paid) was closer to 30%.

In 1981, Ronald Reagan led the way on a landmark deal where tax rates were lowered dramatically (down to 28%), but the deductions and credits were also removed. The economy boomed.

Since then, tax rates edged up to 40% (under Bush senior and Clinton), but the deductions never came back. Warren’s plan to push rates over 70% will do serious economic harm in the absence of the old tax shelters.

But even Warren’s wealth tax proposal is just the tip of the spear. She has an even more radical idea to tax wealth directly. This includes property, stocks, bonds, houses, boats and swimming pools. She claims it will only apply to the “ultra-rich” (who will move to Puerto Rico to avoid it), but before long it will be targeted at those who are only modestly well-to-do.

The definition of “wealthy” is always defined downwards as the government needs newer sources of revenue.

But it’s not just Warren.

One of the oldest sayings in economics is, “There’s no such thing as a free lunch.” Even if you’re not paying for it, someone else is. Of course, the principle applies to any transaction where the price is too good to be true.

Despite that well considered wisdom, these politicians are promising something today that’s even better than a free lunch. It’s free money! Free money is the promise of a new school of economics called Modern Monetary Theory or “MMT.”

If you haven’t heard of it yet, you will be hearing a lot as the 2020 presidential race kicks into high gear. Bernie Sanders is a believer in MMT. And Congresswoman Alexandria Ocasio-Cortez claims it should be part of the “conversation” among Democrats.

The idea is that the Treasury and Fed are a merged entity. The Treasury creates wealth by spending money. The notes issued by the Treasury can simply be bought by the Fed and stashed away on the Fed’s balance sheet until maturity.

This money can be used for infrastructure, healthcare, free tuition, guaranteed jobs and income or anything else.

Well, here’s what: The MMT plan will lead to national insolvency and the repudiation of the dollar, but very few will see that coming until it’s too late.

The simple remedy for investors is to dump dollars and buy hard assets like land, gold, and natural resources.

You may not get a free lunch, but at least you’ll preserve wealth.

Editor’s note: For more of Jim’s insights into the developing financial crisis, check out his new book. Right now, it’s free to readers of Money & Crisis. Click here to get a hardback copy delivered straight to your home.