Gary Cohn Is the Wrong Choice to Head the Fed 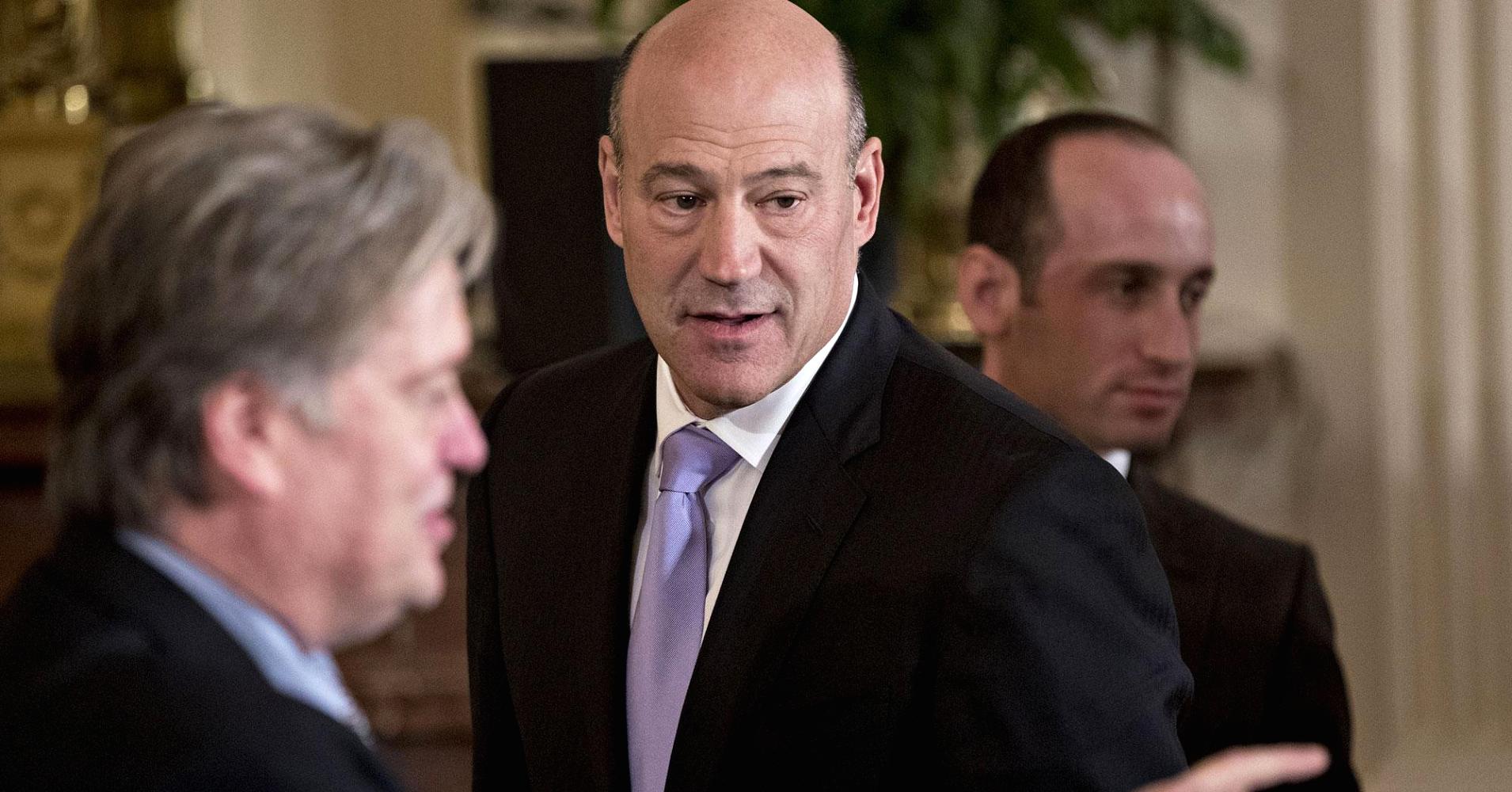 While the very healthy growth of finance beyond the traditional banking and investment banking sectors has changed perceptions somewhat, being named a partner at Goldman Sachs remains one of the most prestigious accomplishments on all of Wall Street. It’s well known that a partnership at the world’s most prominent investment bank carries with it cachet that few career designations can match.

Yet what’s less well known is how extraordinarily difficult it is to maintain one’s partner status at Goldman after having been invited into this most meritocratic of Clubs. As a former very senior Goldman investment banker once told me (full disclosure: I worked at Goldman Sachs from 1998 to 2001), and I only slightly paraphrase, “once you’re named partner the clock starts ticking. Unless you achieve something really remarkable very quickly, you’ll be kicked out.”

So while Cohn’s accomplishments recommend him for all sorts of prominent jobs he remains the wrong choice for Fed Chair.

This is something for the Federal Reserve-focused to keep in mind when thinking about former Goldman #2 Gary Cohn’s desire to replace Janet Yellen as Fed Chairman. Cohn not only made partner at Goldman, he plainly thrived. And he thrived for a very long time.

Whatever one’s view of the Fed, Goldman Sachs, or government in general, what can’t be denied is that Cohn is a remarkably talented person. Sorry, but you just don’t last that long at GS, and at such a high level, unless you’re accomplishing things that very few can.

So while Cohn’s accomplishments alone recommend him for all sorts of prominent jobs in a place where prominence often dies (see Cohn’s former GS colleague, Henry Paulson’s Washington, D.C. stint), he remains the wrong choice for Fed Chair. Importantly, the view that Cohn is the wrong choice has nothing to do with him expanding the central bank’s long overstated power.

About it, the Fed’s greatest champions think that it can quite literally plan Economic growth, that it can dictate specific outcomes of the “money supply” and GDP variety, and that its keen sense of the ridiculous notion of “full employment” allows it to control inflation. What a laugh.

As the 20th century revealed in bright and tragically bloody colors, central planning of any economic outcome is a horrific impossibility. Somehow Fed cheerleaders and their reliably clueless enablers in the media have spared the central bank from the 20th century’s clear verdict about the 100% failure rate of control from the Commanding Heights. That the U.S. economy still booms is a reminder that the Fed has the power to plan next to nothing. Thank goodness.

Economic growth is the greatest enemy rising prices have ever known.

Furthermore, the accepted non-wisdom inside the Fed that says economic growth causes inflation through product and labor shortages ignores the basic laws of economics. To consume is to logically produce first, so the notion that surging production authors shortages ignores how we’re able to consume in the first place. These things balance.

And then as history and logic make abundantly clear, economic growth is the greatest enemy rising prices have ever known. That technological advances are by their very name investment advances that lead to more production in return for less human labor input (thus, lower prices), that production in the U.S. is a global endeavor (think the globalized nature of the production of Boeing and Ford automobiles, to name two), is plainly lost on the Fed’s narrow minds.

Growth itself is what mitigates what is always and everywhere a mirage (labor shortages), except inside the minds of Fed officials. Not only can it not plan or dictate economic outcomes, its discredited models of how the world works indicate that it wouldn’t know what to do even if it could.

As for the Fed’s greatest critics, they needlessly flatter it. Never explained by those convinced that the Fed is the source of nearly every economic ill in the world is how an entity which projects its influence through an antiquated U.S. banking sector, one that represents a small fraction of total domestic credit, could have so much control over the most dynamic economy in the world; one that largely operates free of the risk-averse credit offered up by banks.

Regarding the popular view among conspiracy theorists that the dollar’s 93% decline has been a creation of the Fed's machinations, history mocks this claim. Lest we forget, major dollar devaluations revealed their ugly head in the 19th century despite the Fed being created in the 20th.

Cohn indicated that a weak currency has a positive impact on the economy. Ok, but it doesn’t.

As for the 20th, it was FDR, not the Fed, who foisted a devalued dollar on an already limping U.S. economy in 1933. It was Richard Nixon and his Treasury department, not the Fed, who chose to de-link the dollar from gold in 1971, thus setting in motion a decade of economic malaise that is always the result of devaluation.

Notable here is that Fed Chairman Eugene Meyer resigned over FDR’s mistake, while Arthur Burns begged Nixon to not commit his. There’s nothing to the Fed’s long association with the dollar’s exchange rate despite the overdone claims of the Fed’s greatest critics. They plainly don’t know why they should despise it.

Still, the dollar paradoxically looms as a reason for President Trump to not appoint Cohn. It does because of the perceptions it will create about the Administration’s stance on the matter.

While the dollar’s exchange rate is plainly not part of the Fed’s portfolio (that’s why Fed officials almost as a rule don’t comment on it), it’s been reported by prominent sources that when he initially met with President-elect Trump ahead of the transition, Cohn indicated that a weak currency has a positive impact on the economy. Ok, but it doesn’t.

The economy is not a blob, it’s just people. People earn dollars, and their economic chances are not enhanced when what they earn is being robbed of its value.

If Trump embraces the discredited FDR, Nixon, Carter, Bush (43) policies in favor of a weak currency, his economic program will fail.

Furthermore, the Trump administration has singled out jobs and opportunity as its major economic focus. This speaks loudly to how crippling a policy in favor of a weak dollar would be. There are quite simply no companies and no jobs without investment first, and when investors commit capital they’re buying dollars in the future. A policy of dollar devaluation would run counter to the very investment necessary for the businesses and jobs that the Administration would like to have materialize.

Applied to Cohn, while the dollar is once again not part of the Fed’s portfolio, his appointment to the central bank’s top spot would likely signal to markets that the Administration shares Cohn’s view that a weak dollar is in the best interests of the U.S., and worse, that it’s the Administration’s policy. To be blunt, if Trump embraces the discredited FDR, Nixon, Carter, Bush (43) policies in favor of a weak currency, his economic program will fail.

The Trump economy will similarly be neutered if the Administration, like the Bush (43) administration, approaches the crucial message of the markets in situational fashion.

Getting right to the point, if we love Wall Street we should love it enough to let the insolvent fail. Just as Silicon Valley would be a tiny fraction of its prosperous self if its weakest start-ups (90% fail) were constantly being propped up with taxpayer dollars, so is the financial system needlessly weakened (and with it, the U.S. economy overall) when its insolvent institutions are having their errors cushioned with the money of others. Here again perception matters.

Cohn’s past disqualifies him despite his immense success at GS.

Whatever Cohn’s view of financial bailouts during what is now a period of relative calm, it’s fair to say that his past could cloud his judgement if Goldman once again finds itself in serious trouble, as it did in 2008.

On the above matter, the bailouts that needlessly caused a crisis in 2008 make Cohn the wrong choice for Fed Chair when we remember how much the Fed influenced the Bush administration’s wrongheaded decision to pursue bailouts back then. In that case, Cohn’s past disqualifies him despite his immense success at GS.

Lest we forget, Paulson was a rather fierce critic of bailouts until he wasn’t. Cohn is a risk for the same reason Paulson turned out to be. He might find a reason to save what shouldn’t be saved. Sorry, but business failure is a sign of progress, and this includes banks and investment banks. Even Goldman Sachs.  After that, the politics or optics of appointing a former GS #2 to the Fed’s top spot make the notion of doing so a non-starter.

And while Cohn has made the correct point that the Fed is but one entity in a world of credit (“They’re constrained by the rest of the world”), arguably the biggest disqualifier beyond the bad politics of his appointment concerns his very own politicking for the job. 19th century political economist Walter Bagehot once observed that central banking positions are desired by “vain, grasping men,” and sure enough Cohn is angling for the job.

He wants to “accomplish things” while at the Fed. And that’s very dangerous.

So did Ben Bernanke. Though a long-time Keynesian with views that were plainly of the left-wing variety, Bernanke, sensing a chance to be appointed Fed Chair, became a “Republican” overnight; suddenly courting prominent members of the right inside and outside Washington, D.C. Bernanke was plainly attracted to the prestige of being Fed Chairman, and his lust for relevance caused him to “do something” more than once while in control. We all know how his tenure turned out.

That Cohn wants the job of Fed Chairman is the surest sign that he, like Bernanke, wants to “accomplish things” while at the Fed. And that’s very dangerous. While the Fed’s relevance on a day to day basis is way overplayed, its role in the 2008 bailouts reminds us that on the odd days the Fed is capable of creating major damage. That Cohn plainly lusts for the job is a sign that he believes the Fed has expansive powers that need to be utilized. For that alone, Gary Cohn is the wrong choice for Fed Chairman.

This post first appeared on FREEDOM BUNKER: The Best Libertarian News And Chat, please read the originial post: here
People also like
First Night of the Seven (7) Nights of Christmas and Carols COGOP SVG
Earn Extra Income From Home
This Is What You Should Do If You’re Laid Off
Businesses can be revolutionize
Anxiety symptoms in men
THE ENEMY OF THE UNLIVED MEANINGLESS LIFE
What Investments Are Safest in 2022?

Gary Cohn Is the Wrong Choice to Head the Fed