Tags: nonreligious eastern orthodox australia resident religion clusters exist dominant faith nonreligious demographics
February 9th 2013
View original
Now for an interactive map that lets you browse the religious landscape of Australia. Each suburb in Australia has been classified based on its religious make-up. The classification is designed to highlight where there is particular concentrations of certain religions. It has looser requirements for rarer Australian faiths such as Islam, Buddhism, Hinduism and Judaism. Areas classified with common groups such as Catholicism, Anglicanism and non-religious demographics have stricter criteria and require significant proportions of residents.

The map uses color classifications to identify particularly notable religions in a geographical area. The areas without a colour classification are simply not worth classifying with a single religion - because no religion is dominant enough in these areas to highlight. 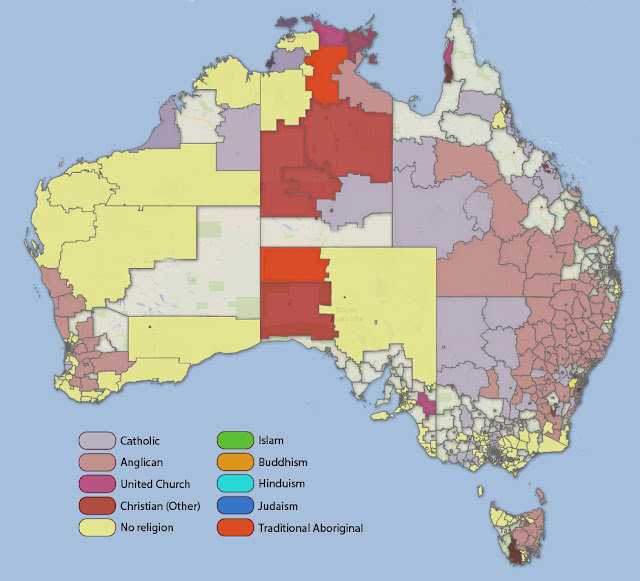 The interactive map is below. Clicking on a suburb reveals more details. All of Australia is covered therefore the map can be navigated as necessary. Across the whole of Australia, the five most common responses were:


Some observations from the map:
Data is provided from the 2011 census undertaken by the Australian Bureau of Statistics. If you would like to read more about Religion and the 2011 Australian Census, click here to read a previous post on the subject.


This post first appeared on Australian Census Stats, please read the originial post: here
People also like
The Ultimate Guide To Obtain a Europe Residence Permit
An Officer and a Spy
Rewarding Your Most Loyal Customers
A Furry’s Guide to Cryptocurrency
Short Happiness Quotes From Famous and Unknown People
5 Important Things You Should Consider Before You Invest in Stock
Nestorian Christians to recreate the Mongol Empire (NECREME)